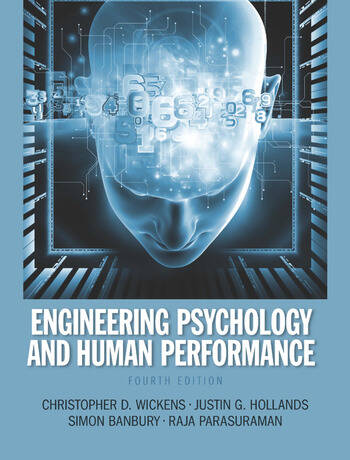 Forming connections between human performance and design Engineering Psychology and Human Performance, 4e examines human-machine interaction. The book is organized directly from the psychological perspective of human information processing. The chapters generally correspond to the flow of information as it is processed by a human being--from the senses, through the brain, to action--rather than from the perspective of system components or engineering design concepts. This book is ideal for a psychology student, engineering student, or actual practitioner in engineering psychology, human performance, and human factors Learning Goals Upon completing this book, readers should be able to: * Identify how human ability contributes to the design of technology. * Understand the connections within human information processing and human performance. * Challenge the way they think about technology's influence on human performance.  * show how theoretical advances have been, or might be, applied to improving human-machine interaction

Chris Wickens is Professor Emeritus from the University of Illinois Department  of Psychology , Adjunct Professor University of Colorado Department of Psychology, and Senior Scientist at AlionSciences Company Boulder, Colorado. He taught engineering and experimental psychology, human factors engineering and aviation psychology for 30 years at the University of Illinois, where he supervised 38 PhD students. For 20 years he was also head of the  Aviation Human Factors program at Illinois.  He has won teaching awards including the Psi-Chi award for excellence in undergraduate teaching, and the Paul M Fitts award from the Human Factors & Ergonomics Society for outstanding contributions to the education and training of human factors specialists. He has also received the annual FAA Excellence in Aviation Award. He is a Fellow of the Human Factors Society. His main research interests are in applied attention theory and  human performance modeling. He is an avid mountain climber.

is a Defense Scientist and Senior Advisor to the Human Systems Integration Section at Defense Research and Development Canada - Toronto. He is also an Adjunct Professor of Mechanical and Industrial Engineering at the University of Toronto. From 1994 to 1999, Dr. Hollands was an Assistant Professor of Psychology at the University of Idaho. He received his PhD in cognitive psychology from the University of Toronto in 1993, and an MA in human factors psychology from the University of Guelph in 1989. He received a BA in psychology (honors--co-operative program) from the University of Waterloo in 1986. His experience as a co-op student in work term placements at the Ontario Ministry of Transportation and Communications, Bell-Northern Research, and IBM Canada sparked his interest in human factors and engineering psychology. Dr. Hollands has authored or co-authored over 50 peer-reviewed articles. He is interested in display and interface design, human reliance on automated systems, visual momentum, visual attention, and human perception and psychophysical scaling.

is the owner and President of Looking Glass HF Inc., an independent Canadian-based Human Factors consultancy specializing in optimizing how people interact with technology. He is also a Professeur Associé of the School of Psychology at the Université Laval (Canada) where he supervises PhD students and supports research on teamwork and medical decision making. Simon has almost twenty years of Human Factors consultancy and applied research experience in defence, industrial and academic domains; he has worked as a Human Factors consultant in the defence and industrial sectors, a lecturer in Psychology at Cardiff University (U.K.), and a defence scientist for the United Kingdom’s Defence Evaluation and Research Agency. Simon has published widely on the applied aspects of attention and memory; including the effects of extraneous noise on performance in the office and on the flight deck.

, Ph.D. is University Professor of Psychology at George Mason University. He is Director of the Graduate Program in Human Factors and Applied Cognition and Director of the Center of Excellence in Neuroergonomics, Technology, and Cognition (CENTEC). His research interests are in attention, automation, neuroimaging, and genetics. He has published over 150 peer-reviewed journal articles and 10 books, including Varieties of Attention,Automation and Human Performance, Neuroergonomics: The Brain at Work,and Nurturing the Older Brain and Mind. He is a Fellow of the American Association for the Advancement of Science, the American Psychological Society, and the Human Factors and Ergonomics Society. His awards include the Franklin Taylor Award for Lifetime Achievement from the American Psychological Association, the Paul Fitts Education Award from the Human Factors and Ergonomics Society, and the Outstanding Faculty Award from the State Council for Higher Education for the State of Virginia. For more information, see http://archlab.gmu.edu/people/rparasur/