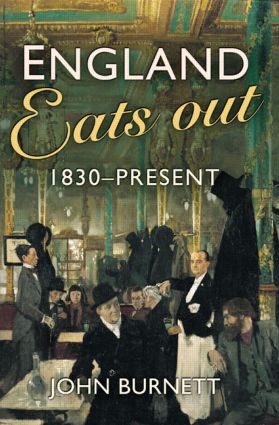 A Social History of Eating Out in England from 1830 to the Present, 1st Edition

Why do so many people now eat out in England? Food and the culture surrounding how we consume it are high on everyone’s agenda. England Eats Out is the ultimate book for a nation obsessed with food.

Today eating out is more than just getting fed; it is an expression of lifestyle. In the past it has been crucial to survival for the impoverished but a primary form of entertainment for the few. In the past, to eat outside the home for pleasure was mainly restricted to the wealthier classes when travelling or on holiday- there were clubs and pubs for men, but women did not normally eat in public places. Eating out came to all classes, to men, women and young people after World War Two as a result of rising standards of living, the growth of leisure and the emergence of new types of restaurants having wide popular appeal. England Eats Out explores these trends from the early nineteenth century to the present.

From chop-houses and railway food to haute cuisine, award winning author John Burnett takes the reader on a gastronomic tour of 170 years of eating out, covering food for princes and paupers.

Beautifully illustrated, England Eats Out covers highly topical subjects such as the history of fast food; the rise of the celebrity chef and the fascinating history of teashops, coffee houses, feasts and picnics.

'This book is a tour de force which reviews the development of not only restaurants, hotels, and cafés but also the many other eating places that have developed in England over the last 170 years. It is written in Professor Burnett’s fluent, easily read style that has engaged his audience in so many books to date.'

“This book is in a class of it’s own as far as I’m concerned,’ wrote one juror. This is a serious read. What a lot of original research has gone into its writing. Properly academic books of this kind can be stuffy but not this one – it’s brilliant, beautifully written and absolutely fascinating. A real contribution to our knowledge of our nation’s past food culture.”

'…unites a love of food, a strong interest in restaurants, and his admirable skills as a social historian.'