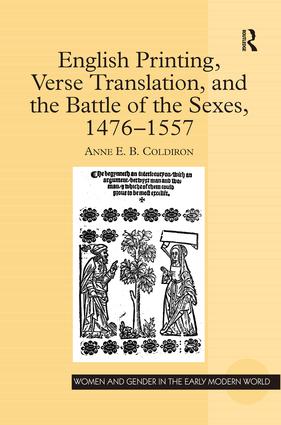 English Printing, Verse Translation, and the Battle of the Sexes, 1476-1557

Bringing to light new material about early print, early modern gender discourses, and cultural contact between France and England in the revolutionary first phase of English print culture, this book focuses on a dozen or so of the many early Renaissance verse translations about women, marriage, sex, and gender relations. Anne Coldiron here analyzes such works as the Interlocucyon; the Beaute of Women; the Fyftene Joyes of Maryage; and the Complaintes of the Too Soone and Too Late Maryed as well as the printed translations of writings of Christine de Pizan. Her selections identify an insufficiently discussed strand of English poetry, in that they are non-elite, non-courtly, and non-romance writings on women's issues. She investigates the specific effects of translation on this alternative strand of poetry, showing how some French poems remain stable in the conversion, others subtly change emphasis in their new context, but some are completely transformed. Coldiron also emphasizes the formal and presentational dimensions of the early modern poetic book, assessing the striking differences the printers' paratexts and visual presentation strategies make to the meaning and value of the poems. A series of appendices presents the author's transcriptions of the texts that are otherwise inaccessible, never having been edited in modern times.

'This book deftly refigures our notions of print, poetry, and gender in Early Modern England. Anne Coldiron is one of the most original and thoughtful scholars of Anglo-French literary relations in this period, and her study synthesizes deep archival research with inventive literary history to restore a large body of neglected books to their rightful place in the study of early print culture and the English literary imagination.' Seth Lerer, Stanford University, USA 'This surprising book finds a missing link between the cultures of medieval and Renaissance England: a foundationally Francophone translating and printing of poetry from the French that is far from courtly, aristocratic, or Petrarchan. Women, in particular, form the object and subject of much of this little-known literature. A.E.B. Coldiron achieves brilliant acts of recovery in introducing us to newly Englished, but still French-accented, tales of women that would haunt cultural imagining between Caxton and Shakespeare. This generous, pioneering book deserves to be widely influential; highly recommended.' David Wallace, University of Pennsylvania, USA ’… this is a solid contribution to our appreciation of some under-contemplated texts.’ Renaissance Quarterly 'Medievalists will be most interested to see what happens to familiar texts as they entered the print shop, especially how medieval views of translation were modified by the print market.' Speculum '… an able, well-informed and illuminating discussion of a fascinating and unjustly neglected topic. An important contribution to scholarship in its own right, it should also act as a stimulus to further research.' Review of English Studies '… this is a sensitive consideration of the cultural capital of French gender dialectics in early modern England. It convincingly and imaginatively shows how ’Englished’ works go beyond the scholastic and courtly origins of the querelle and lead an active and demotic afterlife in English print cultur

Professor Anne E.B. Coldiron is based in the English Department at Florida State University, USA.