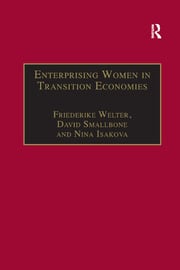 Entrepreneurship is a key element in the development of market based economies and one of the potential drivers of change in countries that are in the process of transformation to market based systems. This book describes and critically assesses the nature and extent of female entrepreneurship in European economies that until 1990 were operating under central planning. At the core of the book are 7 country based chapters which provide an overview of the development of entrepreneurship and small firms since 1990, including a review of the institutional and policy context; an assessment of the role of women within the society during the socialist period; and any major changes afterwards. Each chapter also includes a thematic section (each one addressing a different issue) based on unique empirical data drawn from original research.

Friederike Welter is Professor for SMEs at the University of Siegen and affiliated to the Rhine-Westfalia Institute for Economic Research (RWI Essen), both in Germany. She is also affiliated to the JÃ¶nkÃ¶ping International Business School in Sweden. In March 2005, she was awarded the endowed TeliaSonera Professorship for Entrepreneurship at the Stockholm School of Economics in Riga, Latvia. David Smallbone is Professor of Small Business and Entrepreneurship and Associate Director of the Small Business Research Centre (SBRC) at Kingston University, UK. In 2004, he was awarded the degree of doctor honoris causa by the University of Lodz, Poland for his contribution to the study of entrepreneurship. Nina Isakova holds a scientific degree of Candidate of Sciences in Economics from the National Academy of Sciences of Ukraine. Currently she is a Senior Researcher at the Center for Scientific and Technological Potential and Science History Studies at the National Academy of Sciences of Ukraine.

'An excellent volume of sound, empirically grounded, original contributions that not only shed light on female entrepreneurship but also provide insightful engagement with the nature of entrepreneurship in a transition context...a timely, valuable book for all those with an interest in entrepreneurship and for policy makers involved in countries at different stages of market reform.' Professor Anne de Bruin, Massey University, New Zealand 'This book reflects the untapped potential of women entrepreneurs in transition economies. Based on strong theory and new empirical results, the authors present data showing how women can fill unique market niches and contribute to economic development. At the same time, this book presents a rich tapestry of stories that highlight the diverse challenges facing individual women entrepreneurs and offers solid suggestions where policies and programs might be modified to ensure the success and contributions of women in transition economies.' Professor Candida G. Brush, Babson College, USA 'This book explores in a unique way women's entrepreneurship in the transition context emphasizing both the heterogeneity of this phenomenon and the influence of the women's role in society on their entrepreneurial behaviour...this is an original, interesting and effective book that represents a valuable contribution to global research in the field of entrepreneurship.' South-Eastern Europe Journal of Economics '...Enterprising Women makes an important contribution by laying the groundwork for future work on gender differences...' Feminist Economics