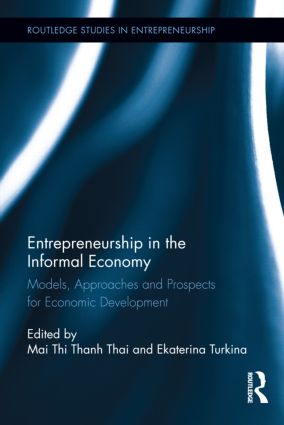 Entrepreneurship in the Informal Economy

Although entrepreneurship in the informal economy occurs outside state regulatory systems, informal commercial activities account for an estimated 30% of economic activity around the world. Informal entrepreneurship goes unmonitored despite the fact that it significantly contributes to poverty reduction and economic development. As a result, the informal sector is open to unethical practices including corruption, worker exploitation, and natural environment abuse to name just a few. In the media, debates have formed around whether informal entrepreneurship should be assisted or legitimized. Hence, a deep understanding of the phenomenon is vitally important.

is Assistant Professor in the Department of International Business, HEC Montreal, Canada.

This series extends the meaning and scope of entrepreneurship by capturing new research and enquiry on economic, social, cultural and personal value creation. Entrepreneurship as value creation represents the endeavours of innovative people and organisations in creative environments that open up opportunities for developing new products, new services, new firms and new forms of policy making in different environments seeking sustainable economic growth and social development. In setting this objective the series includes books which cover a diverse range of conceptual, empirical and scholarly topics that both inform the field and push the boundaries of entrepreneurship.