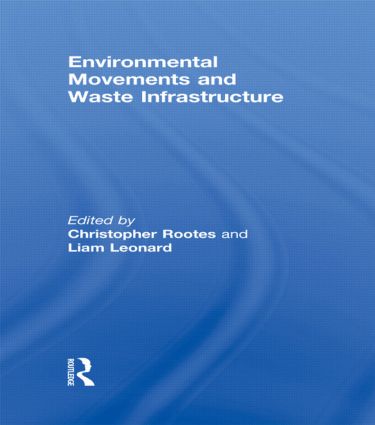 As rates of consumption grow, the problem of waste management has increased significantly. National and local waste authorities seek to manage such problems through the implementation of state regulation and construction of waste infrastructure, including landfills and incinerators. These, however, are undertaken in a context of increasing supra-state regulatory frameworks and directives on waste management, and of increasing activity by multi-national corporations, and are increasingly contested by activists in the affected communities. Environmental Movements and Waste Infrastructure sheds new light on the structures of political opportunity that confront environmental movements and challenge the state or corporate sector. A series of case studies on collective action campaigns from the EU, US and Asia illuminate the similarities and differences between anti-incinerator protests within different states. Several contributions share a concern about cross-border or transnational waste flows. Each case study looks beyond its initial local frame of reference and goes on to interrogate assumptions about NIMBYism or localism, demonstrating the wider linkages and networks established by both grassroots campaigns and state and multinational agencies

Christopher Rootes is Professor of Environmental Politics and Political Sociology as well as Director of the Centre for the Study of Social and Political Movements at the University of Kent, Canterbury.

Liam Leonard is Lecturer in Sociology, Criminology and Human Rights at the Institute of Technology, Sligo