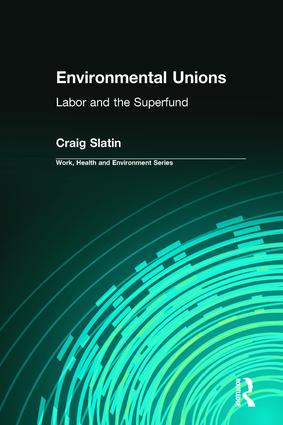 Labor and the Superfund, 1st Edition

During the 1970s and 1980s, a hazardous waste management industry emerged in the U.S., driven by government and polluting industry responses to a hazardous waste crisis. In 1979, labor unions began to seek federal health and safety protections for workers in that industry and for firefighters responding to hazardous materials fires. Those efforts led to a worker health and safety section in the Superfund Amendments and Reauthorization Act of 1986. The legislation mandated regulation of hazardous waste operations and emergency response worker protection, and establishment of a national health and safety training grant program - which became the Worker Education and Training Program (WETP).Craig Slatin provides a history of labor's success on the coattails of the environmental movement and in the middle of a rightward shift in American politics. He explores how the WETP established a national worker training effort across industrial sectors, with case studies on the health and safety training programs of two unions in the WETP - the Oil, Chemical, and Atomic Workers and the Laborers' Union. Lessons can be learned from one of the last major worker health and safety/environmental protection victories of the 1960s-1980s reform era, coming at the end of the golden age of regulation and just before the new era of deregulation and market dominance. Slatin's analysis calls for a critical survey of the social and political tasks facing those concerned about worker and community health and environmental protection in order to make a transition toward just and sustainable production.

Cleaning Up the 20th-Century Mess: Protecting the Workers Who Do It

A Fair Shake and Peer Review

The L-AGC: "Training Is the Blood That Runs Through Our Veins"

The Political Economy of Labor's Policy Initiative and Regulation

The WETP: Protecting Workers, but the Ground Remains Poisoned