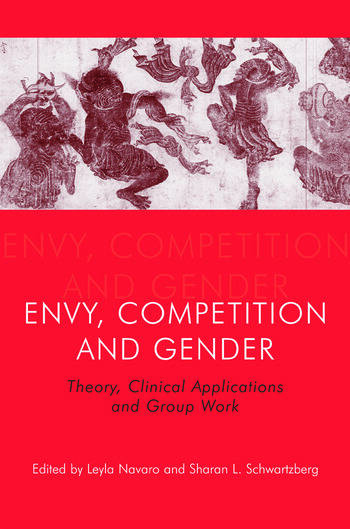 Envy, Competition and Gender provides a unique perspective on gender difference in relation to envy and competitiveness, reframing and de-demonizing these difficult emotions and revealing their potentially creative power.

Incorporating perspectives from psychology, psychiatry, social work, sociology and education, this book provides a comprehensive overview of theories and ideas on the links between gender, envy and competition. The book is divided into three sections, covering the individual and development, therapeutic implications and therapeutic applications in broader social and cultural contexts. Individual and group case stories are included throughout to illuminate discussion of crucial issues such as:

This interdisciplinary, multicultural and international perspective on envy and competition in relation to gender will be of great interest to all psychotherapists and related mental health professionals interested in investigating the positive potential of these powerful emotions.

Nitsun, Foreword. Part 1: Developmental Perspectives.  Envy on the Crossroad Between Destruction, Self-actualization and Avoidance.  Men, Masculinity, and Competition: Whither the New Man?  The Evolution of the Female Self: Attachment, Identification, Individuation, Competition, Collaboration, and Mentoring.  Snow Whites, Stepmothers and Hunters: Gender Dynamics in Envy and Competition in the Family. Part 2: Practice Perspectives.  Envy and Generativity: Owning Inner Resources.  To Have or Not to Be: A Puzzling Question.  On Being Envied: ‘Heroes’ and ‘Victims’.  Envy in Body Transference and Countertransference: Female Treatment Dyads, Patients with Eating Disorders. Part 3: Group Perspectives.  Revenge and Retaliation.  Jealousy, Envy, and Competition: A Gender Difference and the Dynamics as an Anti-group Force in the Group.  Gender, Envy, and Competition in the American Work Place: Academic Setting a Case Example.  Conclusion

Leyla Navaro is an individual, couple and group psychotherapist in private practice in Istanbul. She is an author and presenter on gender issues, concentrating in particular on gender differences in anger, power, dependency and interdependency issues, jealousy, envy and competition.

Sharan L. Schwartzberg is Professor and Chair of Occupational Therapy at Tufts University, Medford MA, USA located in the Boston area. She has written widely on the subjects of group work in occupational therapy, interactive reasoning and ethical and legal dilemmas in the field.

'The Editors are to be congratulated on bringing together a stimulating range of perspectives on an important and complex subject.' - Morris Nitsun

'I commend the editors and their contributors for this timely volume. Readers are bound to have their existing views challenged, revised and hopefully “de-demonised”' - Malcolm Pines

"Anyone struggling with envy, either in their work or personally, (the fact that envy is a universal phenomenon comes through again and again) would do very well to read this accessible, refreshing and illuminating book." - Marcus West, Society of Analytical Psychology, UK