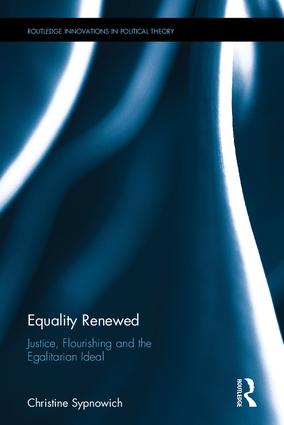 How should we approach the daunting task of renewing the ideal of equality?

In this book, Christine Sypnowich proposes a theory of equality centred on human flourishing or wellbeing. She argues that egalitarianism should be understood as seeking to make people more equal in the constituents of a good life. Inequality is a social ill because of the damage it does to human flourishing: unequal distribution of wealth can have the effect that some people are poorly housed, badly nourished, ill-educated, unhappy or uncultured, among other things. When we seek to make people more equal our concern is not just resources or property, but how people fare under one distribution or another. Ultimately, the best answer to the question, ‘equality of what?,’ is some conception of flourishing, since whatever policies or principles we adopt, it is flourishing that we hope will be more equal as a result of our endeavours.

Sypnowich calls for both retrieval and innovation. What is to be retrieved is the ideal of equality itself, which is often assumed as a background condition of theories of justice, yet at the same time, dismissed as too homogenising, abstract and rigid a criterion for political argument. We must retrieve the ideal of equality as a central political principle. In doing so, she casts doubt on the value of focussing on cultural difference, and rejects the idea of neutrality that dominates contemporary political philosophy in favour of a view of the state as enabling the betterment of its citizens.

'A helpful overview of many central debates in contemporary political philosophy… Sypnowich charts an interesting and perceptive course through the terrain…Equality Renewed will be of interest to a wide audience – including theorists who engage with questions of equality, difference, neutrality and perfectionism – and will be a valuable resource for future debates concerning the role that the state should play in facilitating flourishing.' —Paul Billingham, Ethics

'Sypnowich’s engagement with many of the debates in contemporary political philosophy is outstanding… an excellent piece of contemporary political philosophy.  It engages with many interesting debates and very impressively, draws from a range of material… Sypnowich has done an exceptional job stoking the debates that are currently taking place.' —Christopher Riddle, Philosophy in Review

'The literature on egalitarianism is a crowded one but, in her ambitious and engaging book, Christine Sypnowich is able to carve out a distinctive position that takes human flourishing to be central. She defends her novel "egalitarian perfectionism" by careful engagement with topical issues such as racial justice, gender equality, multiculturalism and liberal neutrality about the good. Equality Renewed is at once an original contribution to egalitarianism and a splendid analysis of the central debates of political philosophy.' —Kok-Chor Tan , University of Pennsylvania

Part I: Challenges to Equality

Chapter 1: Beyond DifferenceChapter 2: Race, Culture and the Egalitarian Conscience

Chapter 5: Equality and the Antinomies of Multicultural Liberalism

Part III: Equality and Living WellChapter 6: What Equality Is and Is Not

Chapter 7: Human Flourishing and the Use and Abuse of Equality

Chapter 9: Equality and the Public Good: Global and Local

Christine Sypnowich is Professor of Philosophy at Queen’s University at Kingston, Canada. She is the author of The Concept of Socialist Law (Oxford, 1990), and editor (with David Bakhurst) of The Social Self (Sage, 1995), and The Egalitarian Conscience: Essays in Honour of G.A. Cohen (Oxford, 2006). Her work has appeared in such journals as Political Theory, Oxford Journal of Legal Studies, New Left Review and Politics and Society.