Equality in Asia-Pacific
Reality or a Contradiction in Terms? 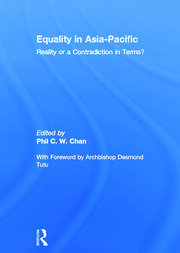 Equality in Asia-Pacific: Reality or a Contradiction in Terms?

In 1948, the United Nations General Assembly proclaimed the Universal Declaration of Human Rights, stating every human being’s right of equality in dignity and right. However, notwithstanding recognition by the international community of its importance and codification in numerous national and sub-national constitutions and legislation, reinforced by various multilateral and regional human rights treaties, the right of equality continues to be unable to take complete firm hold in all regions and countries. Evidence, as presented by the insightful papers in this collection, published initially as a Special Double Issue of The International Journal of Human Rights dedicated to exploring the place of equality in Asia-Pacific societies, suggests that although progress is being made the right of equality has not yet fully materialized, both in law and in reality, in the world’s most populous region. Many factors, particularly entrenched cultural heritage and practices, the lingering effects of colonialism and newly found independence, and, above all, pervasive ignorance and prejudices, continue to impede the recognition, development and protection of equality in this region. Of course, equality, a normative right and entitlement by virtue of our humanity, has neither been fully achieved in societies outside the region. Such neo-colonial thinking in fact perpetuates and assists in the subjugation of the right of equality in the Asia-Pacific Region as a matter of relevance and concern only to Western countries. Accordingly, we hope that our discussions will also be able to shed light and generate reflections on realities outside the region as interlinked with our aim.

The Editor’s book fee has been donated to the UNICEF Tsunami Fund.

This book was previously published as a special issue of The International Journal of Human Rights.

1. Equality in Asia-Pacific: Reality or a Contradiction in Terms? – An Introduction  2. What’s in a Name? Bisexuality, Transnational Sexuality Studies and Western Colonial Legacies  3. Same-Sex Marriage/Constitutionalism and their Centrality to Equality Rights in Hong Kong: A Comparative–Socio-Legal Appraisal  4. Changing Times, Changing Minds, Changing Laws – Sexual Orientation and New Zealand Law, 1960 to 2005  5. The Same-Sex Marriage Debate in Australia  6. Non-Governmental Organising for Gender Equality in China – Joining a Global Emancipatory Epistemic Community  7. On China’s Slow Boat to Women’s Rights: Revisions to the Women’s Protection Law, 2005  8. Inequality of Educational Opportunity in Korea by Gender, Socioeconomic Background, and Family Structure  9. Official Languages and Bilingualism in the Courtroom: Hong Kong, Canada, the Republic of Ireland, and International Law  10. Constitutionalising Affirmative Action in the Fiji Islands