Eros and Music in Early Modern Culture and Literature 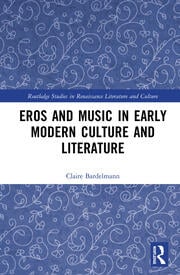 Eros and Music in Early Modern Culture and Literature

What is the relationship between Eros and music? How does the intersection of love and music contribute to define the perimeter of Early Modern love? The Early Moderns hold parallel discourses on the metaphysical doctrines of love and music as theories of harmony. Statements of love as music, of music as love, and of both as harmonic ideals, are found across a wide range of cultural contexts, highlighting the understanding of love as a cultural construct. The book assesses the complexity of cultural discourses on this linkage of Eros and music. The ambivalence of music as an erotic agent is enacted in the controversy over dancing and reflected in the ubiquitous symbolism of music instruments. Likewise, the trivialization of musical imagery in madrigal lyrics and love poetry highlights a sense of degradation and places the love-music relationship at the meeting point of two epistemes. The book also shows the symbolic deployment of the intertwined ideas of love and music in the English epyllion, and offers close readings of Shakespeare’s poems The Rape of Lucrece and Venus and Adonis.

The book is the first to propose an overview of the theoretical, cultural and poetical intersections of Eros and music in Early Modern England. It discusses the connections in a richly interdisciplinary manner, drawing on a wealth of primary material which includes rhetoric, natural philosophy, educational literature, medicine, music theory and musical performance, dance books, performance politics, Protestant pamphlets and sermons, and emblem books.

of Eros and Music in the Early Modern Episteme

Theories of union: discourses of Eros and music

Classical and Christian theories of Eros and music

Speculative music and the Neoplatonic Eros as binding agents

Musical harmony in the microcosm and in the political body

Eros and music as mediating agents

The degradation of the cosmic dance:

"Sellenger’s round, or The Beginning of the World"

The ambivalent rhetorical status of the dancing body

The ethos of the musical genres and the two Eros

Ideas of Eros in madrigal and lute song lyrics

Neoplatonic ideas of love in the lyrics

Music and Eros in the English epyllion

Natural music and the harmonic world

‘Love is forme’: fiction and friction

in Shakespeare’s The Rape of Lucrece and Titus Andronicus

Expressing the unspeakable: Lavinia as Philomel

8 Specularity or speculation? Echo and Eros in Venus and Adonis

Echo/echo and the music of the spheres

Transformative Encounters: Echo and the twofold nature of Eros 162 Echo and Eros in Venus and Adonis

Claire Bardelmann is Associate Professor at the University of Lorraine, France, where she teaches Early Modern Drama. She has an academic background in English and Musicology. She holds an Agrégation in English, and a PhD in Musicology (Paris-Sorbonne University) which investigates the relationship between music and Early Modern literature. The author of many articles in books and journals including Cahiers Elisabéthains, she is the co-editor (with Pierre Degott) of Musique et théâtre dans les Iles Britanniques.