Essays in Media and Cultural Studies
In Transition 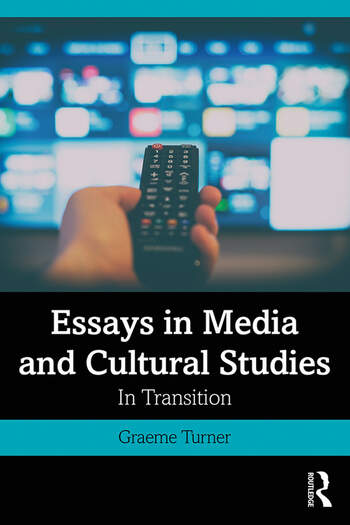 Essays in Media and Cultural Studies: In Transition

Spanning a decade of key research, this collection brings together a selection of essays and chapters from leading media scholar Graeme Turner for the first time.

The organising theme of transition focuses on both the state of the media as it continues its evolution into the digital era, and the fields of media and cultural studies as they grapple with modifying their approaches and assumptions in response to the changing dynamics of the systems they study. In their own attempts to understand a range of contemporary moments over the decade, these essays also provide a personal history of Graeme Turner’s participation in the key debates within media and cultural studies. The essays deal with the shifting states of television, with the changing relation between the media and the state, the rise of celebrity, and the role of a critical agenda for media and cultural studies in the future. The collection is introduced and concluded by two new essays, respectively assessing the recent past and the necessary futures for these fields of study.

Providing key insights into a range of topics, this book is ideal for students and scholars looking to deepen their understanding of the transitionary nature of media and cultural studies.

Chapter One: In transition: media and cultural studies for the digital era

Convergence and divergence: the international experience of digital television

Reality TV and the demotic turn

Part Two: The media and the state

Setting the scene for commercial nationalism: the nation, the market and the media

: The media and democracy in the digital era: is this what we had in mind?

Celebrity, participation and the public

: Culture, politics and the cultural industries: reviving a critical agenda

Graeme Turner is Emeritus Professor in Cultural Studies at the University of Queensland, Brisbane, Australia. He is one of the founding figures of media and cultural studies in Australia and a leading figure internationally; his recent work has focused on post-broadcast television and digital media.