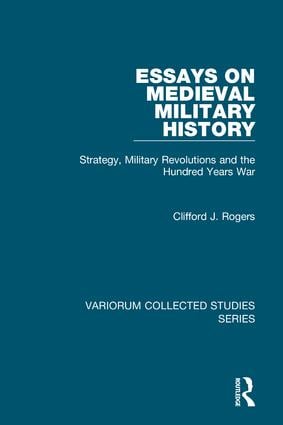 The Hundred Years War has been the focus of much scholarly work over the past decades. In this collection of fifteen studies, Clifford J. Rogers treats numerous aspects of the war, with particular emphasis on the reign of Edward III. Several campaigns are analyzed in detail, drawing on manuscript sources and highlighting the close interrelationship between military operations and political aims and contexts. Several important contemporary texts dealing with the Hundred Years War are included in the volume, both in the original languages and in English translation (including a translation of the 1328-1339 continuation of the Manuel d'histoire de Philippe VI not previously published.) A long essay discussing the devastation of France during the Hundred Years War is significant not only for understanding the place of ravaging in medieval warfare, but for appreciating its terrible effects on the daily lives of ordinary medieval people. Other articles in the collection take a very broad view, examining the generalities of medieval military strategy, the nature of military revolutions across history, and the significance of developments in the conduct and structures of war for changes in late medieval society generally.

’Taken together, the essays published by Rogers over the past seventeen years have had an important, and positive impact on the study of the tactics and strategies of the early phases of the Hundred Years’ War. Rogers is owed a considerable debt of gratitude, in addition, for his discovery and publication of new sources of information that shed light on critical battles fought during Edward III’s reign.’ H-France '… whether one agrees with Rogers or not, one can not fail to be hugely impressed by his serious learning and scholarly expertise; his thought-provoking arguments only add to the great enjoyment of reading his work.' European Review of History 'Having this material collected together in one handy volume rather than scattered through numerous books and photocopies from journals will be a great aid in tracking down important information in a timely manner.' Arquebusier

Contents: Introduction. Part 1 Strategy: Edward III and the dialectics of strategy, 1327-1360; The offensive/defensive in medieval strategy; The Vegetian science of warfare in the Middle Ages; Part 2 Military Revolutions: The military revolutions of the Hundred Years War; 'Military revolutions' and 'revolutions in military affairs': a historian's perspective; 'As if a new sun had arisen': England's 14th-century RMA; The efficacy of the medieval longbow: a reply to Kelly DeVries. Part 3 The Hundred Years War: By fire and the sword: bellum hostile and 'civilians' in the Hundred Years War; A continuation of the Manuel d'histoire de Philippe IV for the years 1328-39; An unknown news bulletin from the siege of Tournai in 1340; The Bergerac campaign (1345) and the generalship of Henry of Lancaster; The Scottish invasion of 1346; Three new accounts of the Neville's Cross campaign (with M.C. Buck); Sir Thomas Dagworth in Brittany, 1346-7: Restellou and La Roche Derrien; The Anglo-French peace negotiations of 1354-1360 reconsidered; Addenda and corrigenda; Index