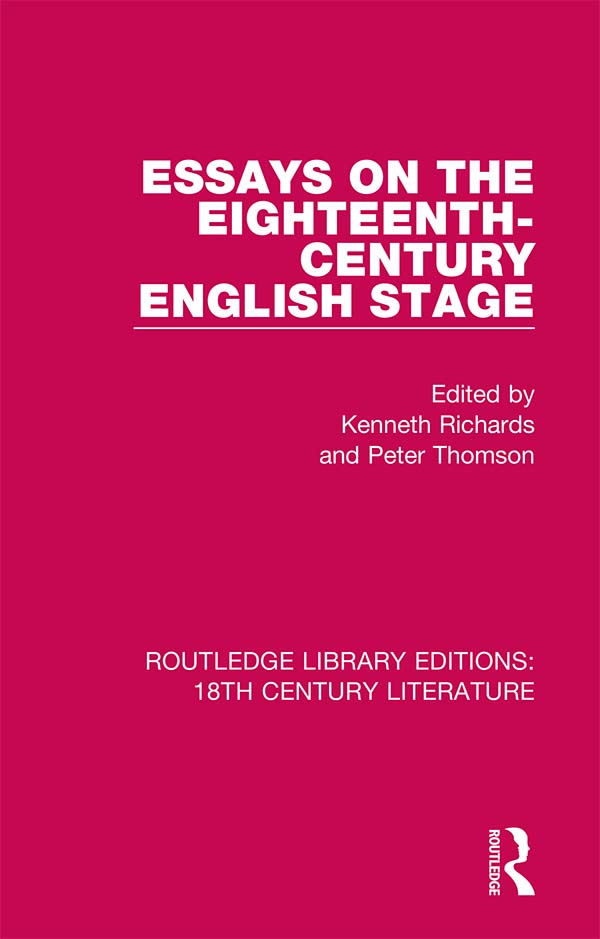 The eighteenth century produced more inventive actors than fine dramatists, and it displayed its actors to increasing advantage as theatre management became more expert, and stage design more ambitious. First published in 1972, the eleven papers collected in The Eighteenth-Century English Stage, originally read at a Manchester University Symposium in July 1971, follow this historical emphasis. Two papers are centred on dramatists, four on actors, three on managers, and two on designers.

Malcolm Kelsall analyses Steele’s debt to Terence, using his classical scholarship as illuminatingly as Edgar Roberts uses his musical scholarship in writing about the songs in Fielding’s plays. George Taylor compares and evaluates a number of theories of acting, and speculates on the likely relevance of the best-known books on rhetoric, whilst Kathleen Barker, Arnold Hare, and David Rostron consider the work of individual actors – Powell, Cooke, and John Kemble. Theatre managers are represented by John Rich in Paul Sawyer’s sympathetic account, Thomas Harris, who is given new life in the recent researches of Cecil Price, and Stephen Kemble, fixed by Kenneth Robinson in canny control of the Newcastle theatre circuit. Finally, Graham Barlow reaches some controversial conclusions about the dimensions of the Theatre Royal, Drury Lane, by subjecting Thornhill’s sketches to a practising designer’s statistical examination, and Sybil Rosenfeld carries a stage further her pioneering work on eighteenth-century scene-painting and design. The two last are attractively illustrated by 8 pages of plates.

This book’s particular value lies in its bringing together several simply presented but deeply informed explorations of often neglected aspects of the eighteenth-century theatre. The papers, with their general sense of enthusiasm and concern for their subject, will interest all students of the eighteenth century, and theatre enthusiasts in particular.

This 13 volume set contains titles, originally published between 1949 and 1991. Focusing on eighteenth-century England it includes titles which examine novels, drama and poetry from the time. There are titles that discuss the literature in a historical, sociological and political context as well as from a feminist perspective. Other texts look at the language and structure used in literature and how it has evolved over time. This collection will be of interest to students of literature and literary theory.