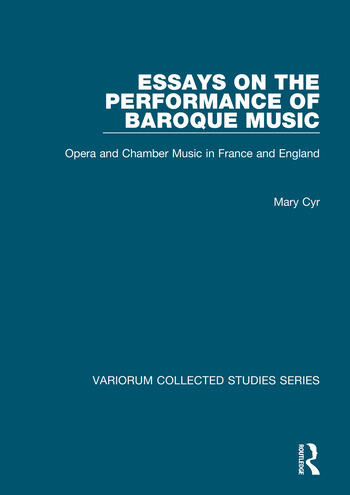 Essays on the Performance of Baroque Music: Opera and Chamber Music in France and England

In this collection of essays Mary Cyr explores some of the written and unwritten performance conventions that applied to French and English music of the 17th and early 18th centuries. Using composers' own notations, marks added by 18th-century performers, historical treatises, and pictorial evidence, she investigates both vocal and instrumental genres, including opera, cantatas, instrumental chamber music, and solo music for the viol and violin. Some of the performance conventions remain controversial, such as the use of gesture by the French opera chorus, and others are still little-known, such as the use of the double bass for rhythmic and harmonic support in early 18th-century French opera. As many of these essays demonstrate, French Baroque music allowed performers a wider latitude of nuance and expression than is often assumed today. The essays in this volume will be of particular interest to scholars and performers who are interested in adopting a historically-informed approach to performing music by Henry Purcell, Ã‰lisabeth-Claude Jacquet de La Guerre, Jean-Philippe Rameau, and their contemporaries. Several studies also deal with attributions, sources, and the discovery of a cantata by Rameau.

Contents: Part 1 Vocal Music in France: Ã‰lisabeth-Claude Jacquet de La Guerre: a biographical essay; The sacred and secular cantatas of Ã‰lisabeth-Claude Jacquet de La Guerre: an introduction; Representing Jacquet de La Guerre on disc: scoring and basse continue practices and a new painting of the composer; A new Rameau cantata; Performing Rameau's cantatas; Towards a chronology of Rameau's cantatas; Declamation and expressive singing in recitative; 18th-century French and Italian singing: Rameau's writing for the voice; On performing 18th-century haute-contre roles; Basses and basse continue in the orchestra of the Paris Opéra, 1700-1764; The dramatic role of the chorus in French opera: evidence for the use of gesture, 1670-1770; The Paris Opéra chorus during the time of Rameau; 'Inclina Domine': a Martin motet wrongly attributed to Rameau; Preface to FranÃ§ois Martin, Petits Motets for One and Two Solo Voices with Instruments; Bach's music in France: a new source. Part 2 The Viol and Violin in England: A 17th-century source of ornamentation for voice and viol: British Museum ms. Egerton 2971; Carl Friedrich Abel's solos: a musical offering to Gainsborough?; Books on old violins and 19th-century playing from the bequest of T.W. Mills; Tempo graduations in Purcell's sonatas; Violin playing in late 17th-century England: Baltzar, Matteis, and Purcell; Ornamentation in English lyra viol music: part 1: slurs, juts, and thumpes and other 'graces' for the bow; Ornamentation in English lyra viol music: part 2: shakes, relishes, falls, and other 'graces' for the left hand; Index.

Mary Cyr is Professor of Music, Emerita, at the University of Guelph, Canada.

’The articles on ornamentation in English lyra viol music are a must for viol players interested in this repertoire... This book covers 30 years of work, but is so well researched and close to the sources that the older essays are not out of date... an extremely informative volume, of much use to performers and scholars alike.’ The Viola da Gamba Society Journal ’The articles are thoroughly researched and substantial; several of them have content which can teach us to perform baroque music to which they refer with greater historical awareness. And they break valuable new ground.’ The Consort