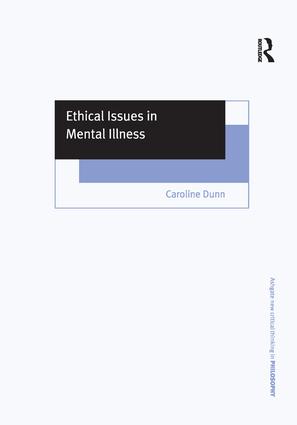 This book is an attempt to address the ethical issues raised by mental illness and its treatment by focusing on the question of autonomy. The mentally ill may be regarded as non-autonomous by virtue of irrationality, which may result in treatment models which deny them a voice. As a counter to this, some have moved to the other extreme and argued that the mentally ill must be regarded as fully autonomous in all circumstances, and consequently that all their wishes regarding treatment must be respected. This book examines the ethical consequences of such simplistic approaches towards autonomy and mental illness, and considers the ethical issues raised by specific forms of treatment. It is suggested in conclusion that improvement in the care and treatment of the mentally ill requires not only a fundamental change in social attitudes but also a less impoverished conception of autonomy than some of those currently employed.

’Caroline Dunn has a rare ability to combine empathic use of first-hand accounts of the day-to-day experience of service users, with a strong philosophical eye. The ’voiceless patient’, a product of traditional bioethics as much of traditional biomedicine, is voiceless no more.’ KWM Fulford, Professor of Philosophy & Mental Health, University of Warwick and Honorary Consultant Psychiatrist, University of Oxford ’A small school of thinkers and researchers has followed the anti-psychiatry movement with sympathy and is satisfied with the newly won right of the mentally ill….the author hopes that education will successfully teach us and our children to accept that mentally ill people share humanity with us.’ Ethical Perspectives.

The Ashgate New Critical Thinking in Philosophy series brings high quality research monograph publishing into focus for authors, the international library market, and student, academic and research readers. Headed by an international editorial advisory board of acclaimed scholars from across the philosophical spectrum, this monograph series presents cutting-edge research from established as well as exciting new authors in the field. Spanning the breadth of philosophy and related disciplinary and interdisciplinary perspectives Ashgate New Critical Thinking in Philosophy takes contemporary philosophical research into new directions and debate.