Ethics and War in the 21st Century 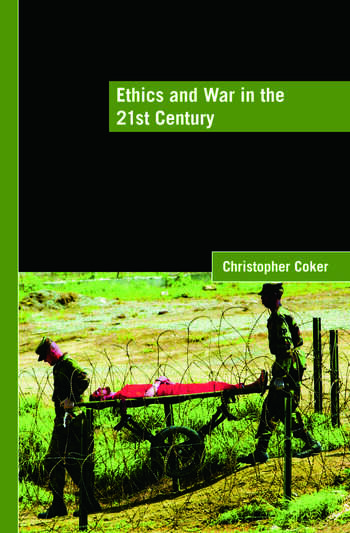 Ethics and War in the 21st Century

This book explores the ethical implications of war in the contemporary world. The author, a leading theorist of warfare, explains why it is of crucial importance that Western countries should continue to apply traditional ethical rules and practices in war, even when engaging with international terrorist groups.

The book uses the work of the late American philosopher Richard Rorty to explain the need to make ethical rules central to the conduct of military operations. Arguing that the question of ethics was re-opened by the ‘War on Terror’, the book then examines America’s post-9/11 redefinition of its own prevailing discourse of war. It ends with a discussion of other key challenges to the ethics of war, such as the rise of private security companies and the use of robots in war. In exploring these issues, this book seeks to place ethics at the centre of debates about the conduct of future warfare.

This book will be of great interest to all students of military ethics, war studies, military history and strategic studies in general, and to military colleges in particular.

Christopher Coker is Professor of International Relations, LSE and Visiting Professor at the Staff College, Oslo. He is the author of many books on war, most recently ‘The Warrior Ethos’ (Routledge 2007). He is a former NATO Fellow.

'A compelling book and an insightful critique of the War on Terror.' - Aidan Hehir, Journal of Intervention and Statebuilding, Vol. 4, 1, May 2010

'In an eminently readable and historically informed narrative, Coker demonstrates that we have rules of war, not because we are nice but because we are sensible.  These rules are hard to apply to novel situations like the struggle against terrorism, but failure to do so almost inevitably makes victory more elusive and costlier.  Statesmen, soldiers, diplomats, scholars, and anyone concerned with the problem of war and ethics, will find this an informative, provocative and helpful book.' -  Richard Ned Lebow, Dartmouth College, USA

'Over the last few years Christopher Coker has developed a far reaching, hard hitting and profoundly original treatment of war; its character, future and impact on ourselves and our polities. In Ethics and War in the Twenty First Century, he carries this argument still further, posing questions that many will find unsettling, while interrogating assumptions all too often left unexamined. Written with grace, elegance and power, and with a reach and range that few contemporary scholars can match, this is a book that nobody interested in war and its place in the contemporary world can afford to ignore.' - Nicholas Rengger, St Andrews University