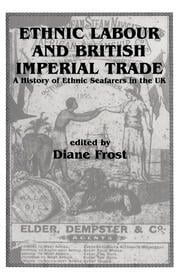 Ethnic Labour and British Imperial Trade: A History of Ethnic Seafarers in the UK

This collection of essays identifies a neglected but significant component of Britain's maritime and labour history, that of ethnic labour drawn from Britain's colonies in West Africa, the Middle East and Asia. The interdisciplinary nature of the volume raises a number of important issues: race and ethnicity, colonialism and migration, social class and the complex nature of racial hostility meted out by organized white labour.

The Black Poor of London : Initiatives of Eastern Seamen in the Eighteenth and Nineteenth Centuries, Racism, Work and Unemployment: West African Seamen in Liverpool 1880s-1960s, The Role of Seamen's Agents in the Migration for Employment of Arab Seafarers in the Early Twentieth Century, Across the Universe : Racial Violence and the Post-War Crisis in Imperial Britain, 1919-25, Class, Race and Nation: The Politics of the ‘Arab Issue’ in South Shields 1919-39, The Political Imperatives of Bureaucracy and Empire: The Case of the Coloured Alien Seamen Order, 1925, Strikes! African Seamen, Elder Dempster and the Government, 1940-42

International Journal of Maritime History- "a significant contribution to out understanding of some of the non-Europeans who were increasingly significant in manning British ships from the mid-nineteenth century."

African Affairs- " this book...should prove highly stimulating, especially through the useful notes at the end of each chapter. When, ultimately, a comprehensive history of ethnic seafarers in British Imperial trade is written, this small book should occupy an hnourable place in its historiography