Ethnic Literatures and Transnationalism
Critical Imaginaries for a Global Age 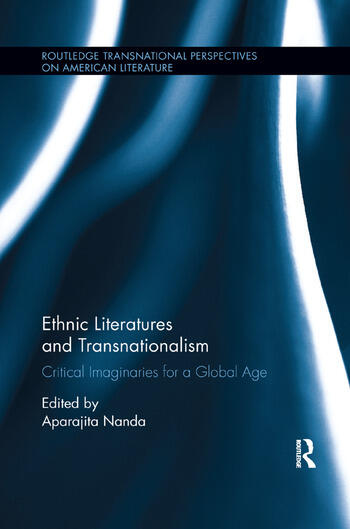 Ethnic Literatures and Transnationalism: Critical Imaginaries for a Global Age

As new comparative perspectives on race and ethnicity open up, scholars are identifying and exploring fresh topics and questions in an effort to reconceptualize ethnic studies and draw attention to nation–based approaches that may have previously been ignored. This volume, by recognizing the complexity of cultural production in both its diasporic and national contexts, seeks a nuanced critical approach in order to look ahead to the future of transnational literary studies.

The majority of the chapters, written by literary and ethnic studies scholars, analyze ethnic literatures of the United States which, given the nation’s history of slavery and immigration, form an integral part of mainstream American literature today. While the primary focus is literary, the chapters analyze their specific topics from perspectives drawn from several disciplines, including cultural studies and history. This book is an exciting and insightful resource for scholars with interests in transnationalism, American literature and ethnic studies.

Aparajita Nanda, recipient of a Fulbright faculty teaching scholarship and a Visiting Associate Professorship to the departments of English and African American Studies, UC Berkeley, has taught at Jadavpur University, India and now teaches both at UC Berkeley and Santa Clara University. Her most recent publications include Romancing the Strange, Black California, The Strangled Cry, and articles in Ariel and Callaloo.

'Ethnic Literatures and Transnationalism provides new perspectives on how contemporary ethnic writers, filmmakers and visual artists animate in original, distinctive, and creative ways the transnational spaces they encounter in the present and recover from the past. These discussions of hybrid texts infused by hybrid cultures—of counterfactual histories and alternative futures; of refugees and migrants; of forgotten artists and erased civilizations; of nomads, cautious cosmopolites, and citizens of the world—all help us think in fresh ways about transnational communities, global mobility, trauma, loss, and the complex flow of cultures across borders.'

'A thought -provoking collection which addresses the current transnational turn in the USA as it impinges on ethnic literatures, reframing them in relation to the cross-currents of world literature and the tensions between global forces and ethnic subcultures.'

'These essays seek variously to de-provincialise U. S. American studies by setting to work the ‘transnationalist turn’. Returning the United States to its postcolonial as well as superpower trajectory, the collection reveals how ethnic and postcolonial studies, no less than diaspora studies, must be at the heart of any broaching of transnationalism within a neo-liberal globalizing frame. Spanning contemporary London, Oklahoma, and Ethiopia, Beijing as well as the British Commonwealth, this wide-ranging book evidences richly the utopian potential of transnational literature, in Bill Ashcroft’s phrase, for envisaging a less border-burdened world. Those seeking a Benjaminian interruption in the stream of time, a breaching of an otherwise ceaseless ‘repetition of unfulfilled expectations’, to quote Jonathan Flatley on W. E. B. DuBois, will find much of compelling interest here.'