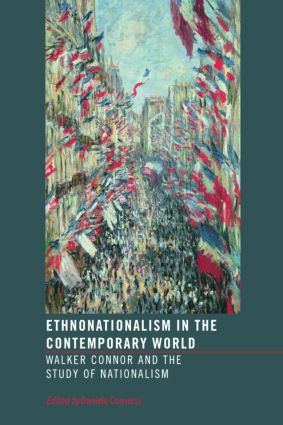 Ethnonationalism in the Contemporary World

Walker Connor and the Study of Nationalism, 1st Edition

In Ethnonationalism in the Contemporary World, world-renowned scholars employ various aspects of Connor's work to explicate the recent upsurge of nationalism on a global scale. In keeping with the growing awareness that the study of ethnonationalism requires an interdisciplinary approach, the contributors represent a number of academic disciplines, including anthropology, geography, history, linguistics, social psychology, sociology and world politics. The book discusses issues such as identity, ethnicity and nationalism, primordialism, social constructionism, ethnic conflict, separatism and federalism. It also features case studies on the Basque country, South Africa and Canada.

'In the first book-length treatment of Walker Connor's ideas on nationalism, the editor Daniele Conversi persuasively argues that, to a lesser or greater extent, we are all Connorian in our approaches to the

study of nationalism. … This stimulating collection of essays is indeed beneficial to both graduate students and researchers. Regardless whether they accept Connor's argument or not, they will certainly gain a much clearer understanding of the implications of various concepts and theories of nationalism.'

'Daniele Conversi is to be warmly congratulated on producing this edited volume; allowing the contributors too debate with each other, as it were, around the theme of the primordial roots of the very modern phenomena of nations an nationalism raises many questions, suggests some highly relevant answers, and points the way to fruitful new research on this vital dimensions of social and political life.'

Daniele Conversi received his PhD at the London School of Economics. He taught at the Government and History Deptartments at Cornell and Syracuse Universities, as well as at the Central European University, Budapest. His book,The Basques, the Catalans, and Spain(1997) has been acclaimed by political scientists, historians, anthropologists and sociologists alike, and has been positively reviewed in nearly forty international journals. His second bookThe disintegration of Yugoslavia(2000) has recently been translated into Catalan. Daniele Conversi is currently working on a larger volume on Theories of Nationalism