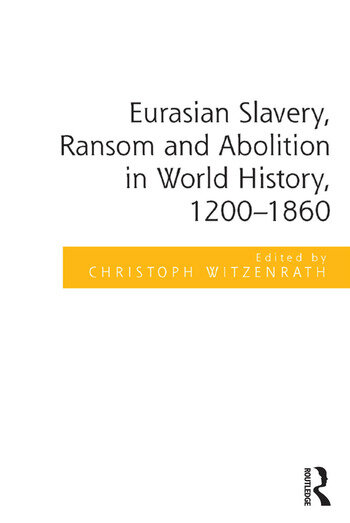 Recent research has demonstrated that early modern slavery was much more widespread than the traditional concentration on plantation slavery in the context of European colonial expansion would suggest. Slavery and slave trading, though little researched, were common across wide stretches of Eurasia, and a slave economy played a vital part in the political and cultural contacts between Russia and its Eurasian neighbours. This volume concentrates on captivity, slavery, ransom and abolition in the vicinity of the Eurasian steppe from the early modern period to recent developments and explores their legacy and relevance down to the modern times. The contributions centre on the Russian Empire, while bringing together scholars from various historical traditions of the leading states in this region, including Poland-Lithuania and the Ottoman Empire, and their various successor states. At the centre of attention are transfers, transnational fertilizations and the institutions, rituals and representations facilitating enslavement, exchanges and ransoming. The essays in this collection define and quantify slavery, covering various regions in the steppe and its vicinity and looking at trans-cultural issues and the implications of slavery and ransom for social, economic and political connections across the steppe. In so doing the volume provides both a broad overview of the subject, and a snapshot of the latest research from leading scholars working in this area.

Contents: Introduction, Christoph Witzenrath. Part I Overviews: Slavery and bondage in Central Asia and Russia: 14th-19th centuries, Alessandro Stanziani; Towards the integration of early modern Russia into world history, Donald Ostrowski. Part II Slavery in the Middle Ages: Slavery in the appanage era: Rus’ and the Mongols, Lawrence N. Langer; ’... and they took countless captives’: Finnic captives and East European slave trade during the Middle Ages, Jukka Korpela; Ransom for the Grand Prince: a medieval military encounter as a prehistory of the Muscovite empire, Bulat R. Rakhimzyanov. Part III Demographies, Locales and Groups of Slaves: The Black Sea slave trade according to the Istanbul port customs register, 1606-1607, ZÃ¼beyde GÃ¼neÅŸ-YaÄŸcÄ±; A demographic profile of slaves in early Ottoman Aleppo, Charles L. Wilkins; Iasyry: non-orthodox slaves in pre-Petrine Russia, Hans-Heinrich Nolte. Part IV Perceptions of Slavery: Poles in the Caucasian Corps, 1830-1860: personal freedom, political independence, captivity and slavery as ideas and experience, Aleksandra Porada; The prisoner’s tale: Russian captivity narratives and changing Muscovite perceptions of the Ottoman-Tatar Dar-al-Islam, Brian L. Davies; The conquest of Kazan’ as a place of remembering the liberation of slaves in 16th- and 17th-century Russia, Christoph Witzenrath; Captivity, slavery and gender: Muscovite female captives in the Crimean Khanate and in the Ottoman empire, Aleksandr Lavrov. Part V Abolishing Bondage: A ’barbarous law’? Capture and liberation in the Russo-Habsburg-Ottoman War of 1787-1792, Will Smiley; Russian serfdom’s demise and Russia’s conquest of the Crimean Khanate and the northern Black Sea littoral: was there a link?, Peter B. Brown. Index.

Christoph Witzenrath, PhD (Lon) is principal investigator of his project on slavery, liberation and political culture in Muscovy and Ruthenia at the University of Greifswald, funded by the German Research Community. He has held fellowships at Harvard, Yale, the German Historical Institute in Moscow, Toronto and a Leverhulme Trust early career fellowship at the University of Aberdeen, UK.