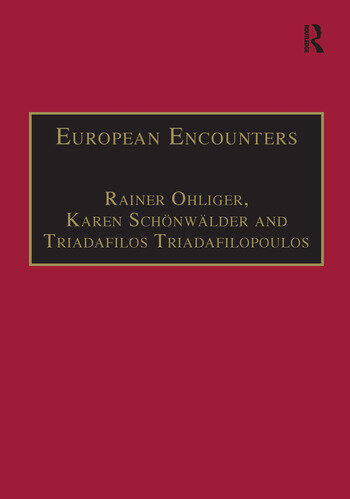 This book reminds us of Europe's multi-faceted history of expulsions, flight, and labour migration and the extent to which European history since 1945 is a history of migration. While immigration and ethnic plurality have often been divisive issues, encounters between Europeans and newcomers have also played an important part in the development of a European identity. The authors analyze questions of individual and collective identities, political responses to migration, and the way in which migrants and migratory movements have been represented, both by migrants themselves and their respective host societies. The book's distinctive multi-disciplinary and international approach brings together experts from several fields including history, sociology, anthropology and political science. ’European Encounters’ will serve as an invaluable tool for students of contemporary European history, migration, and ethnic identities.

’This interesting volume constitutes an important contribution to the still much neglected migration history of post war Europe. By including case studies from states at the margin as well as stressing the relevance of agency and gendered patterns, the chapters in this multifaceted and multilayered book will function as an empirical and conceptual stimulus for future research.’ Professor Leo Lucassen, University of Amsterdam, The Netherlands ’European Encounters is a rich and ambitious history of migration and the migrant experience in Europe, which does not stick to the standard script. It covers many countries, east and west, and examines not only the history of migration since 1945, but problems of politics, ethnicity, identity, gender, and historical memory. Anyone who wants to know how migration has reshaped modern Europe should read this book.’ Professor James F. Hollifield, Southern Methodist University, USA ’This edited collection brings together new and interesting work on European migration...the breadth, range and scope of the analyses enhances our understanding of the diversity and richness of Europe’s migration experience. For this reason, the book is a welcome addition to the literature.’ Journal of Southern Europe and the Balkans ’In this important volume, Rainer Ohliger, Karen SchÃ¶nwÃ¤lder and Triadafilos Triadafilopoulos weave together a collection of essays that challenge dominant assumptions pervading the literature on post-World War II European migration...this is a significant collection of essays, and one that should occupy a prominent place on the shelves of serious migration scholars...a monumental volume that will likely reshape European migration scholarship in profound ways.’ Focaal: European Journal of Anthropology