European Integration and Transformation in the Western Balkans
Europeanization or Business as Usual? 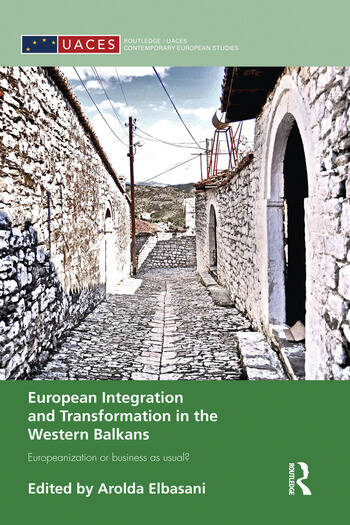 European Integration and Transformation in the Western Balkans: Europeanization or Business as Usual?

The book investigates the scope and limitations of the transformative power of EU enlargement in the Western Balkans.

The extension of EU enlargement policy to the region has generated high expectations that enlargement will regulate democratic institution-building and foster reform, much as it did in Central and Eastern Europe. However, there is very little research on whether and how unfavourable domestic conditions might mitigate the transformative power of the EU. This volume investigates the role of domestic factors, identifying ‘stateness’ as the missing link between the assumed transformative power of the EU and the actual capacity to adopt EU rules across the region. Including chapters on Croatia, Serbia, Macedonia, Albania, Kosovo, and Bosnia-Herzegovina, leading scholars in the field offer up-to-date comparative analysis of key areas of institutional and policy reform; including state bureaucracy, rule of law, electoral management, environmental governance, cooperation with the International Court of Justice, economic liberalization and foreign policy.

Looking to the future and the implications for policy change, European Integration and Transformation in the Western Balkans provides a new theoretical and empirical focus on this little understood area. The book will be of interest to scholars and students of EU politics, comparative democratisation, post-communist transitions and Balkan area studies.

"Each successive enlargement of the European Union has been more problematic, hence, the imposition of ever stricter conditions for membership. Nowhere has political conditionality been more assiduously applied than in the Western Balkans. Formally, these countries complied by rapidly adopting EU norms; informally, different combinations of clientelism, patronage, corruption, judicial favouritism, administrative incompetence, government duplicity, and weak stateness have undermined their implementation. This volume brings together scholars of European integration, comparative politics and international relations to assess this monumental effort at "induced Europeanization." Their findings make for sober reading – indispensable for any understanding of Europe’s most "troubled periphery." - Philippe C. Schmitter, Emeritus professor, European University Institute, Florence, Italy.

"This timely volume extends the study of the European Union’s impact on domestic politics to the Western Balkans. Focusing on the domestic factors that mediate the role of the EU , the book shows convincingly that weak state capacities are a key obstacle to ‘Europeanisation’. The country studies provide empirically rich and analytically grounded insights into how the EU was able to influence domestic reforms in certain cases, but also the limits of such reforms." - Dr Ulrich Sedelmeier, LSE, London, UK.

"An important question for 21st Century scholarship on development is whether and how actors from more developed parts of the world can promote domestic institutional change in newly emerging democracies. Bridging the comparative study of democratization with literature on Europeanization, this volume explores the role that EU enlargement played in fostering institutional transformation in the Western Balkans. Relying on Europeanization via enlargement literature, but focusing on domestic conditions at the receiving end of enlargement, the contributors in the volume show that EU incentives have created a pool of pro-EU elites, but structural constraints still inhibit the meaningful adoption and implementation of EU rules." - Professor Laszlo Bruszt, European University Institute, Florence, Italy.

"This volume dedicated to the impact of EU policies in the Western Balkans (WB) builds upon, but also offers key amendments, to earlier works that celebrated the EU as a motor of change in Central and Eastern Europe (CEE). In retrospect, we now see that liberalization and democratization in CEE was advanced by a number of factors, making outcomes over-determined. In the WB, the EU faces more "deficient democratizers" who are saddled with an array of difficulties, including legacies of conflict and contested statehood, that may complicate the influence of EU conditionality. The strength of this empirically rich volume is that by moving away from a simplistic "top-down" model of EU-led change, it offers more nuance about when, how and to what degree the EU policy can make a difference." - Professor Paul Kubicek, Oakland University, USA.

"This volume is a significant contribution to our understanding of the combined dynamic of post-communist transition and Europeanisation in the often neglected Western Balkan region...The book covers several case studies, focusing on different states as well as policy areas and providing information about the degree of EU impact and the level of acceptance or rejection of EU requirements."
Dragomir Stoyanov, Sofia University, Europe-Asia Studies