European Integration as an Elite Process
The Failure of a Dream? 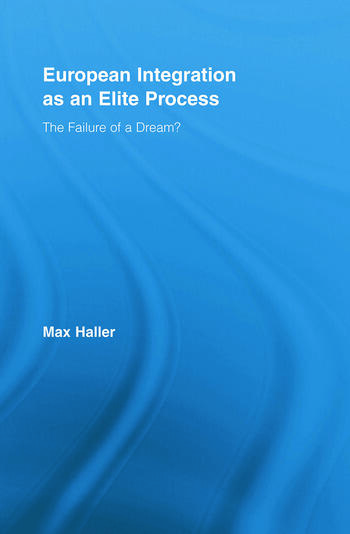 European Integration as an Elite Process: The Failure of a Dream?

Max Haller's impressive book presents an analysis of the process of European integration which keeps the relation between elites and citizens at the forefront. It is shown on the basis of new empirical data (surveys, interviews, analyses of documents and biographies) that European integration has been led since the beginning by the elites and that today there exists a considerable split between elites and citizens; this split is becoming more profound in the course of time.

The book covers the following themes:

- the structure, interests and behaviour of the different elites (political, economic, bureaucratic)

- the strategies of the elites to win the consent of the people, in view of widespread scepticism

- proposals for reform of the EU, especially with regard to a strengthening of democratic elements which could reduce the split between elites and citizens.

A timely and original read, this book will be a useful addition to the library of any political sociologist, political scientist or scholar of European integration.

1. Living in Two Different Worlds? The Increasing Split Between Elites and Citizens about European Integration  2. European Integration as an Elite Process: Theoretical Approach  3. The Political Elites: How Integration Has Opened Up a Wide Field of New Political Careers  4. The Economic Elites: Between Global Capitalism and European (Neo-) Corporatism  5. The Eurocracy: The Irresistible Growth of a New and Powerful Supranational Bureaucratic Elite  6. One Union or Many? Divergent Views of Integration in the Different EU Member States  7. The Dream of Europe: Intellectual Ideas of Integration and their “Realization”  8. The EU as a “Community of Law": Proposals for Strengthening its Social and Democratic Character.

Max Haller is a leading sociological researcher on Europe and European integration. In addition to 30 articles in international journals on this topic, he has edited six volumes, including Class Structure in Europe (Armondk, NY/ London 1990), Toward a European Nation (Armonk, NY/ London 1994), and The Making of the European Union, (Berlin/ Heidelber/ New York 2001). He was a co-founder (together with D. Lane) of the European Sociological Association.