Europe's Encounter with Islam
The Secular and the Postsecular 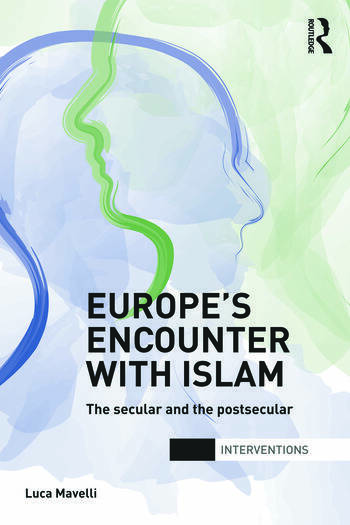 Europe's Encounter with Islam: The Secular and the Postsecular

In the last few years, the Muslim presence in Europe has been increasingly perceived as ‘problematic’. Events such as the French ban on headscarves in public schools, the publication of the so-called ‘Danish cartoons’, and the speech of Pope Benedict XVI at the University of Regensburg have hit the front pages of newspapers the world over, and prompted a number of scholarly debates on Muslims’ capacity to comply with the seemingly neutral and pluralistic rules of European secularity.

Luca Mavelli argues that this perspective has prevented an in-depth reflection on the limits of Europe’s secular tradition and its role in Europe’s conflictual encounter with Islam. Through an original reading of Michel Foucault’s spiritual notion of knowledge and an engagement with key thinkers, from Thomas Aquinas to Jurgën Habermas, Mavelli articulates a contending genealogy of European secularity. While not denying the latter’s achievements in terms of pluralism and autonomy, he suggests that Europe’s secular tradition has also contributed to forms of isolation, which translate into Europe’s incapacity to perceive its encounter with Islam as an opportunity rather than a threat.

Drawing on this theoretical perspective, Mavelli offers a contending account of some of the most important recent controversies surrounding Islam in Europe and investigates the ‘postsecular’ as a normative model to engage with the tensions at the heart of European secularity. Finally, he advances the possibility of a Europe willing to reconsider its established secular narratives which may identify in the encounter with Islam an opportunity to flourish and cultivate its democratic qualities and postnational commitments.

This work will be of great interest to students and scholars of religion and international relations, social and political theory, and Islam in Europe.

Introduction  1. Theorising the Secular: Modernity and the Separation of Reason and Faith  2. From Autonomy to Isolation: A Genealogy of European Secularity  3. The Withdrawal From the Muslim Other  4. The European Search of Co-Immunity and Islam  5. Imagining the Postsecular  6. Conclusion

'Luca Mavelli offers an original contribution to the discussion of Europe's encounter with Islam. The book is a remarkable attempt to offer insight and develop research on the contradictions within the European political project. In this respect, the book offers a compelling argument by suggesting that the present debate on Muslim integration is led on one hand by Europe's incapacity to perceive Islam as an opportunity rather than a threat and that this debate has its roots in a tension at the heart of the secular episteme, on the other hand by the attempt to integrate the Muslim Other through the imposition of universal narratives, which do not offer any perspective for who does not comply with the image of the European self.' - Marco Scalvini, LSE Review of Books, August 2012

'Why is the presence of Muslim communities in Europe considered politically problematic? Most European observers point to their cultural and religious difference from the non-Muslim majority. But European states claim to be secular, that is, based on the principle of religious neutrality. In this book Luca Mavelli takes a more original approach by linking the ‘problem’ to epistemological shifts that he identifies in the emergence of modernity. The result is an intelligent and learned study that deserves to be widely read and pondered over.' - Talal Asad, Distinguished Professor at the Graduate Center of the City University of New York, author of Formations of the Secular: Christianity, Islam, Modernity

'Luca Mavelli has written a very timely and provocative book. Comparing a variety of Euro-American takes on secularism to each other and all of them to several perspectives on Islam in Europe, he opens new lines of possibility for a post-secular culture. This is a sparkling and compelling book.' - William E. Connolly, Krieger-Eisenhower Professor, Johns Hopkins University, author of Why I am not a Secularist

'Luca Mavelli offers a sophisticated ‘alternative’ genealogy of European secularity to help us rethink and reframe Europe’s problematic ‘encounter with Islam.’ The end- result is an original, elegant and thought -provoking monograph that both illumines the conceits of secularisation theory as well demonstrates the constricting horizon of extant critique. Mavelli problematizes and deconstructs the secular, situates it within the longue durée of Western Reason, and uncovers the episteme that continues to reproduce scopic regimes of capturing Islam’s ontological presence in Europe. ' - Mustapha Kamal Pasha, Sixth Century Chair & Head of International Relations, University of Aberdeen

'This is a truly original and extraordinarily timely ‘intervention’ that should be welcomed by an overlapping scholarly community. It is the product of a cumulative, synthetic endeavour that bundles together thus far scattered layers of social and political theory and the often too dispersive discussion of current affairs. It does so in ways that facilitate the mutual clarification of both a type of theory that might otherwise appear too distant from facts (like some key concepts from Foucault’s oeuvre), and of facts that without appropriate theoretical backgrounds might fall prey to simplifying interpretive schemes (like the ‘clash of civilizations’ theorem and cognates). On this account, the level of knowledge produced by Luca Mavelli is really outstanding.' - Armando Salvatore, University of Naples ‘L’Orientale’, author of The Public Sphere: Liberal Modernity, Catholicism, Islam.

'Rather than a study of the question of Muslims in Europe, Mavelli offers a critical engagement with ‘the variable "Europe" ’: engaging the terms in which Europe encounters Islam, exploring the genealogy of Europe’s privileged secularity, and marking the intellectual and political limits of European secularism(1).'

- Anne Norton is Professor of Political Science and Comparative Literature at the University of Pennsylvania.