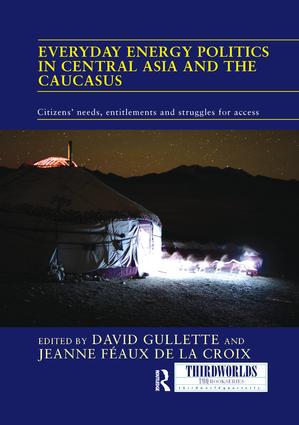 Everyday Energy Politics in Central Asia and the Caucasus

The perception of Central Asia and its place in the world has come to be shaped by its large oil and gas reserves. Literature on energy in the region has thus largely focused on related geopolitical issues and national policies. However, little is known about citizens’ needs within this broader context of commodities that connect the energy networks of China, Russia and the West. This multidisciplinary special issue brings together anthropologists, economists, geographers and political scientists to examine the role of all forms of energy (here: oil, gas, hydropower and solar power) and their products (especially electricity) in people’s daily lives throughout Central Asia and the Caucasus. The papers in this issue ask how energy is understood as an everyday resource, as a necessity and a source of opportunity, a challenge or even as an indicator of exclusionary practices. We enquire into the role and views of energy sector workers, rural consumers and urban communities, and their experiences of energy companies’ and national policies. We further examine the legacy of Soviet and more recent domestic energy policies, the environmental impact of energy use as well as the political impact of citizens’ energy grievances.

This book was published as a special issue of Central Asian Survey.

2. The illumination of marginality: how ethnic Hazaras in Bamyan, Afghanistan, perceive the lack of electricity as discrimination Melissa Kerr Chiovenda

6. Notes on the moral economy of gas in present-day Azerbaijan Tristam Barrett

Resource consumption and its impacts

7. Switching off or switching source: energy consumption and household response to higher energy prices in the Kyrgyz Republic Franziska Gassmann and Raquel Tsukada

8. Bottom-up and top-down dynamics of the energy transformation in the Eastern Pamirs of Tajikistan’s Gorno Badakhshan region Tobias Kraudzun

David Gullette, PhD is a social anthropologist and development specialist. His work has focused on ‘tribalism’ and politics in Kyrgyzstan, as well as a range of issues contributing to conflict and poverty in the region. His work includes mining as well as anthropology in international development work.

Jeanne Féaux de la Croix, PhD is a social anthropologist specializing in resource and development issues. She has conducted studies of ageing, landscape perception and dam development in Kyrgyzstan. Based at the German university of Tübingen, she leads a junior research group on the Cultural History of Water in Central Asia, and co-ordinates a Volkswagen Foundation project on the social and environmental history of the Naryn and Syr Darya river.

THIRDWORLDS will focus on the political economy, development and cultures of those parts of the world that have experienced the most political, social, and economic upheaval, and which have faced the greatest challenges of the postcolonial world under globalisation: poverty, displacement and diaspora, environmental degradation, human and civil rights abuses, war, hunger, and disease.

THIRDWORLDS serves as a signifier of oppositional emerging economies and cultures ranging from Africa, Asia, Latin America, Middle East, and even those ‘Souths’ within a larger perceived North, such as the U.S. South and Mediterranean Europe. The study of these otherwise disparate and discontinuous areas, known collectively as the Global South, demonstrates that as globalisation pervades the planet, the south, as a synonym for subalterity, also transcends geographical and ideological frontiers.