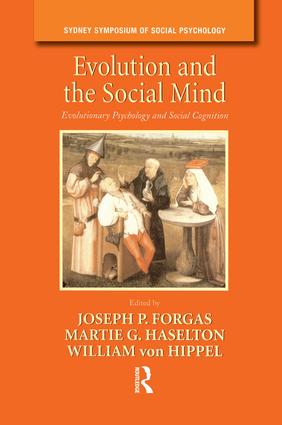 Evolution and the Social Mind

This book seeks to combine the study of human social cognition - the way we think, decide, plan and analyze social situations - with an evolutionary framework that considers these activities in light of evolutionary adaptations for solving problems of survival faced by our ancestors over thousands of generations. The chapters report recent research and theories illustrating how evolutionary principles can shed new light on the subtle and often subconscious ways that cognitive mechanisms guide peoples’ thoughts, memories, judgments, attitudes and behaviors in social life.

The contributors to this volume, who are leading researchers in their fields, seek answers to such intriguing questions as: how can evolutionary principles help to explain human beliefs, attitudes, judgments, prejudice, and group preferences? Are there benefits to behaving unpredictably? Why are prototypical faces more attractive than atypical ones? How do men and women think about, and select potential mates? What are the adaptive functions of negative affect? What are the evolutionary influences on the way people think about and respond to social exclusion and ostracism?

Evolution and the Social Mind offers a highly integrated and representative coverage of this emerging field, and is suitable as a textbook in advanced courses dealing with social cognition and evolutionary psychology.

"Evolution and the Social Mind is an absolute masterpiece. It provides the first major synthesis of social cognition and evolutionary psychology, and paves the way for the next decade of research. It is truly a landmark volume, and will become required reading for all scholars in the field."

-David M. Buss, Author of Evolutionary Psychology: The New Science of the Mind

Joseph P. Forgas received his DPhil and subsequently a DSc from the University of Oxford. He is currently Scientia Professor Psychology at the University of New South Wales, Sydney, Australia. He has also spent various periods of time working at the Universities of Giessen, Heidelberg, Stanford, Mannheim, and Oxford. His enduring interest is in studying the role of cognitive and affective processes in interpersonal behavior. His current projects investigate how mood states can influence everyday social judgments and interaction strategies. He has published some 17 books and more than 130 articles and chapters in this area. He has been elected Fellow of the Academy of Social Sciences in Australia, the Hungarian Academy of Sciences, the American Psychological Society, and the Society for Personality and Social Psychology. He is recipient of the Alexander von Humboldt Research Prize (Germany), a Special Investigator Award, and a Professorial Research Fellowship from the Australian Research Council.

Martie G. Haselton received her PhD in Psychology in the year 2000 from the University of Texas, Austin. She is currently Associate Professor of Communication Studies and Psychology at the University of California, Los Angeles. She serves as co-editor in chief at Evolution and Human Behavior, board member of the UCLA Center for Behavior, Evolution, and Culture, associate director of the NSF-funded Interdisciplinary Relationship Science Program at UCLA, and elected member at large of the Human Behavior and Evolution Society. She has dozens of scientific publications on bias in social judgment, psychological changes in women across the ovulatory cycle, and the evolution of human mate choice and sexuality.

William von Hippel received his BA from Yale University, and his PhD from the University of Michigan. He taught at Ohio State University for 11 years prior to coming to the University of New South Wales in 2001. He has over 50 publications and served as Associate Editor of Psychological Science and Personality and Social Psychology Bulletin. His main research areas include social cognitive aging, executive functioning, and evolutionary psychology.

The aim of the Sydney Symposia of Social Psychology is to provide new, integrative insights into key areas of contemporary research. Held every year at the University of New South Wales, Sydney, each symposium deals with an important integrative theme in social psychology, and the invited participants are leading researchers in the field from around the world. Each contribution is extensively discussed during the symposium and is subsequently thoroughly revised into book chapters that are published in the volumes in this series.