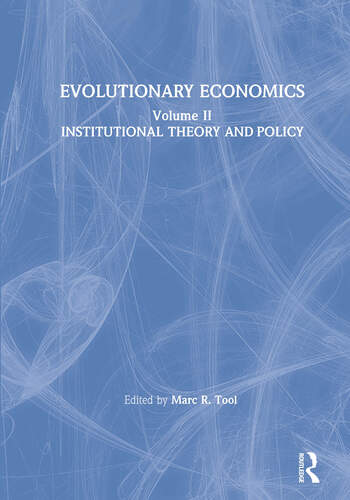 This is part of a two-volume work intended to map the theoretical heartland of the institutionalist perspective on political economy. Volume II considers basic economic processes, institutions for stabilizing and planning economic activities, the role of power and accountability, and emerging global interdependence. Marc R. Tool is the editor of "Journal of Economic Issues".

Harry Van Arsdale (1905-1986) was a towering figure in the New York labor scene. After being initiated into the Local 3 International Brotherhood of Electrical Workers in 1925 and becoming its business manager in 1933, Van Arsdale turned the then corrupt and disorganized union into a force to be reckoned with. He became president of the New York City Central Labor Council in 1957, which put him in a position to become a greater influence for labor relations locally and nationally. As business manager and president of these organizations, Van Arsdale advocated and won shorter work days, in order to give more men a chance to work - especially important in the 1930s. He instituted paid vacation, paid holidays, annuity plans, and educational opportunities for union workers - novelties at that time - as well as scholarships for workers' children. His sincere commitment to improving the lives of American workers and their families made him a truly beloved figure. This fascinating memoir traces Van Arsdale's sixty-plus years as a union member and powerful labor figure, and provides colorful details of his many remarkable accomplishments.

Marc R. Tool is Emeritus Professor of Economics at California State University, Sacramento. He is the author of The Discretionary Economy: A Normative Theory of Political Economy (1979), and Essays in Social Value Theory: A Neoinstitutionalist Contribution (1986). He was the editor of An Institutionalist Guide to Economics and Public Policy (1984). He is a member of the executive board of the Association for Evolutionary Economics and past president of the Association for Institutional Thought. He has been editor of the Journal of Economic Issues since 1981.