Evolutionary Naturalism in Victorian Britain
The 'Darwinians' and their Critics 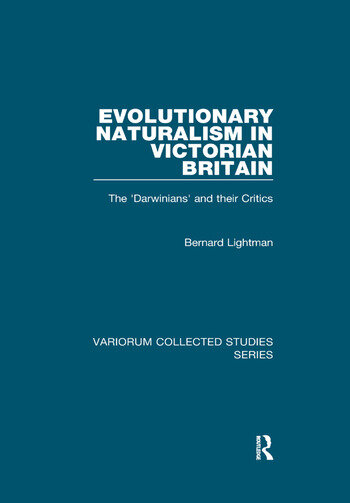 Evolutionary Naturalism in Victorian Britain: The 'Darwinians' and their Critics

Scholars have tended to portray T.H. Huxley, John Tyndall, and their allies as the dominant cultural authority in the second half of the 19th century. Defenders of Darwin and his theory of evolution, these men of science are often seen as a potent force for the secularization of British intellectual and social life. In this collection of essays Bernard Lightman argues that historians have exaggerated the power of scientific naturalism to undermine the role of religion in middle and late-Victorian Britain. The essays deal with the evolutionary naturalists, especially the biologist Thomas Henry Huxley, the physicist John Tyndall, and the philosopher of evolution, Herbert Spencer. But they look also at those who criticized this influential group of elite intellectuals, including aristocratic spokesman A. J Balfour, the novelist Samuel Butler, and the popularizer of science Frank Buckland. Focusing on the theme of the limitations of the cultural power of evolutionary naturalism, the volume points to the enduring strength of religion in Britain in the latter half of the 19th century.

Contents: Introduction; Science, scientists and the public: the contested meanings of science in Victorian Britain; Victorian sciences and religions: discordant harmonies; Robert Elsmere and the agnostic crises of faith; Interpreting agnosticism as a nonconformist sect: T.H. Huxley's 'new reformation; Scientists as materialists in the periodical press: Tyndall's Belfast address; Huxley and scientific agnosticism: the strange history of a failed rhetorical strategy; Ideology, evolution, and late-Victorian agnostic popularizers;' Fighting even with death': Balfour, scientific naturalism, and Thomas Henry Huxley's final battle; 'A conspiracy of one': Butler, natural theology and Victorian popularization; 'The voices of nature': popularizing of Victorian science; Frank Buckland and the resilience of natural theology: curiosity of natural history?; Science and the postmodern crisis; Index.

’This volume is the record of a major achievement and will be very useful in making that achievement more easily available to a new generation of scholars.’ British Journal for the History of Science '... [this] collection is undoubtedly an excellent one...' Victorian Studies