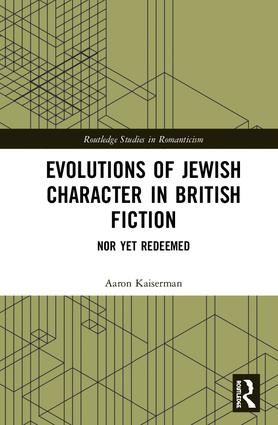 Nor Yet Redeemed, 1st Edition

Evolutions of Jewish Character in British Fiction: Nor Yet Redeemed builds upon recent scholarship concerning representations of Jews in the British Romantic and Victorian periods. Existing studies identify common trends, or link positive Jewish portrayals to authorial interests and social movements; this volume argues that understanding developments in Jewish portrayals can be enhanced by looking at the way antecedent Jewish characters and tropes are negotiated within developing literary movements. Evolutions of Jewish Character in British Fiction examines how the contradictory nature of Jewish stereotypes, combined with the Jews’ complicated entanglement of religion, race, and nationality, presented an opportunity for writers to think about the gap between representations and individuals. The tension between stereotyping and Realist impulses leads to a diversity of Jewish types, but also to an increasingly muddled sense of Jewish interests. This confusion over Jewish identity generated in turn a subgenre of texts that sought to educate readers about Jews by interrogating stereotypes and thinking about the Jews’ relationships to host cultures. In a literary landscape increasingly defined by individuality and Realism, outcast and secretive Jews provided subjects ready-made to reveal the inadequacies of surfaces for understanding the interior self. The replacement of simplistic Jewish stereotypes with morally complex Jewish characters is an effect both of Realism’s valuation of interiority and of the historical movement towards expanding the definitions of British identity.

Introduction: "What is a Jew?": Stereotypes, Realism and the

I. Shylock’s Metamorphoses and the Jew Bill Controversy

II. The Political Valences of Jews in the Revolutionary Decade

Anglo-Jews, or Jews in England?

Aaron S. Kaiserman holds a PhD from the University of Ottawa and has taught courses in general fiction and children’s literature. This monograph expands on his doctoral thesis on the evolution of Jewish portrayals. His publications include: "‘Wandering through Bowers Beloved’: The Wandering Jew and the Woman Poet in Caroline Norton’s The Undying One". Nineteenth-Century Gender Studies Vol. 11.1 (Spring 2015); and "(De)Radicalism: Rootlessness and the Subversive Power of Money in Godwin’s Caleb Williams and St Leon". Lumen Vol. 32 (2013).