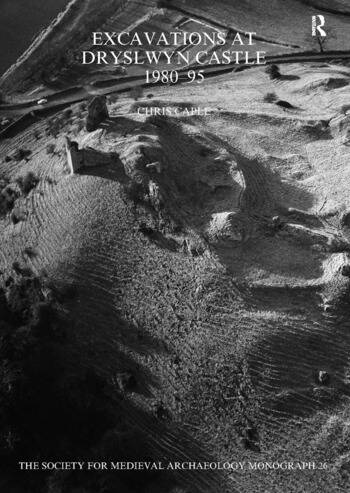 Excavations at Dryslwyn between 1980 and 1995 uncovered a masonry castle, founded in the late 1220s by Rhys Gryg for his son Maredudd ap Rhys, the first Lord of Dryslwyn. The first castle was a simple round tower and polygonal walled enclosure, within which were constructed a kitchen, prison and wood-framed, clay-floored great chamber beside a great hall. In the mid 13th century a second ward was added and the great chamber rebuilt in stone. This castle was greatly expanded in the period 1283-87 by Rhys ap Maredudd, the second and final Lord of Dryslwyn, who built an Outer Ward and gatehouse. He also rebuilt much of the Inner Ward, adding an extra storey to the great hall and great chamber, apartments and a chapel. At the end of the 13th century a large three-ward castle stretched along the eastern and southern edge of the hill while the rest of the hilltop was occupied by a settlement defended by a wall and substantial ditch with access through a gatehouse. This castle and its associated settlement were besieged and captured in 1287 by an English royal army of over 11,000 men following damage inflicted by a trebuchet and mining of the walls. Throughout the 14th century the English Crown garrisoned and repaired the castle, supervised by an appointed constable, before it was surrendered to Owain Glyn Dwr in 1403. During the early to mid 15th century the castle was deliberately walled up to deny its use to a potential enemy and it was subsequently looted and demolished. By the late 13th century, the castle had a white rendered and lime-washed appearance, creating a very dramatic and highly visible symbol of lordship. Internally, the lord's and guest apartments had decorative wall paintings and glazed windows. Evidence from charred beams still in situ, the sizes, shapes and distribution of nails, sheet lead, slates and postholes recovered during excavation has enabled some of the wooden as well as masonry buildings to be reconstructed. Waterlogged deposits had preserAt just 132 hectares (325 acres) the parish of Caldecote is one of the smallest parishes in Hertfordshire. Today the settlement comprises the manor house, until recently surrounded by a range of traditional farm buildings, together with six labourer's cottages and the church. To the north lies the site of the old rectory and the earthworks of a medieval settlement. In 1973 the Department of Environment and the Deserted Medieval Village Research Group arranged a rescue excavation to examine the earthworks of the medieval village before they were levelled and ploughed. Five crofts, the old rectory site and much of the moated enclosure were investigated in one of the largest excavations ever conducted on a later medieval rural site in Britain. Though the excavations did recover a Bronze Age beaker burial and small quantities of Roman and Iron Age pottery, the medieval settlement at Caldecote was probably founded in the 10th century, and by the time of the Domesday Survey there was a church, a priest and nine villeins. A moated site was added in the 13th century. A century later, Caldecote was granted to the abbots of the Benedictine monastery in St Albans, at a time when there were seventeen householders. Early in the second half of the 14th century, the estate and demesne were subdivided into six farms, each complete with a hall-house and two or more barns. Following the dissolution of the monastery in 1539, the manor was again held by an absentee lord and the farms continued to prosper. However, the late 16th and early 17th centuries, for which there are several surviving wills and inventories, saw their gradual abandonment.After the desertion of Caldecote Marish in 1698, Caldecote was farmed as a single unit until 1970, when the estate was attached to that adjoining the manor of Newnham. Of particular importance from Caldecote is the archaeological evidence for medieval peasant structures, the development of the later medieval domestic plan and the structural tra