Exceptionalism and the Politics of Counter-Terrorism
Liberty, Security and the War on Terror 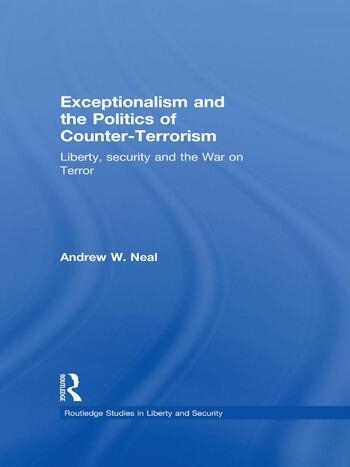 Exceptionalism and the Politics of Counter-Terrorism: Liberty, Security and the War on Terror

This book is an analysis and critique of the concepts of ‘exception’ and ‘exceptionalism’ in the context of the politics of liberty and security in the so-called ‘War on Terror’.

Since the destruction of the World Trade Centre on September 11th 2001, a notable transformation has occurred in political discourse and practice. Politicians and commentators have frequently made the argument that the rules of the game have changed, that this is a new kind of war, and that exceptional times require exceptional measures. Under this discourse of exceptionalism, an array of measures have been put into practice, such as detention without trial, ‘extraordinary rendition’, derogations from human rights law, sanction or connivance in torture, the curtailment of civil liberties, and aggressive war against international law.

This is the first book to capture the importance of the exceptionalism debate in a single volume, and will be of much interest to students of critical security studies, political philosophy, IR theory and sociology.

Introduction  1. The Liberty/Security Discourse and the Problem of the Exception  2. Freedom and Liberty in Classic Political Theory: Hobbes and Kant  3. Carl Schmitt and the Politics of the Exception  4. Giorgio Agamben’s Exception: ‘The Great Historico-Transcendental Destiny of the Occident’  5. Securitization Theory: Practices of Sovereign Naming  6. Foucault in Guantanamo: Towards an Archaeology of the Exception  7. The Rise and Fall of Schmitt at the Hands of Foucault and Others

Andrew W. Neal is a Lecturer in International Relations at the University of Edinburgh. His PhD won the British International Studies Association best thesis prize in 2006.