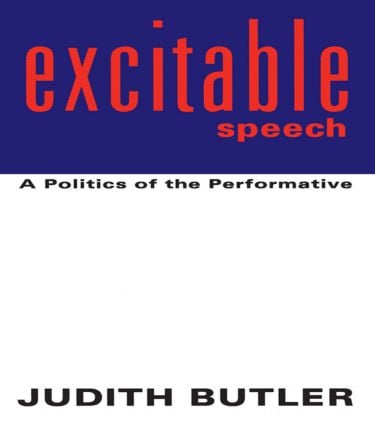 A Politics of the Performative, 1st Edition

With the same intellectual courage with which she addressed issues of gender, Judith Butler turns her attention to speech and conduct in contemporary political life, looking at several efforts to target speech as conduct that has become subject to political debate and regulation. Reviewing hate speech regulations, anti-pornography arguments, and recent controversies about gay self-declaration in the military, Judith Butler asks whether and how language acts in each of these cultural sites.

"Butler's exploration of racist, sexist, and homophobic language is hence of acute significance to anyone concerned with the sociopolitical and theoretical implications of hate speech." -- The Lesbian Review of Books

"This book offers a challenging analysis of the free speech debates. As she moves from the often frightening contradictions in legal arguments to the visceral pain caused by hate speech, Butler makes a compelling case that our laws--and our lives--are determined by conceptual frameworks." -- Lambda Book Report

"Excitable Speech offers a thoughtful consideration of the ways in which speech and speaking are used by all points on the political spectrum to further political ends." -- The Bay Guardian

"This sober and subtle work draws us into the dark heart of a world where words wound, images enrage, and speech is haunted by hate. Butler intervenes brilliantly in an argument that tests the limits of both legal claims and linguistic acts. She explores the link between 'reasons' of state and the passions of personhood as she meditates on utterance as a form of incitement, excitement, and injury. There is a fine urgency here that expands our understanding of the place of the 'affective' in the realm of public events." -- Homi Bhabha, The University of Chicago

"Judith Butler has brilliantly challenged us to rethink our conventional ideas about the power of speech. As is to be expected of Butler,Excitable Speech is original, witty, and lucidly argued. This book is essential reading for anyone concerned with the politics of free speech." -- Drucilla Cornell, Rutgers University School of Law

"If to speak is to act, what follows? In this shrewd and compelling book, Judith butler, the philosopher of Queer Theory and the performative theory of gender, takes up the thorniest problems of our day concerning the relation between speech and action, such as hate speech, pornography, and the military's policy that makes a declaration of homosexuality a punishable act. Her analyses are brilliant engagements that refuse to oversimplify and show us that politics requires serious thinking." -- Jonathan Culler, Cornell University

"Flag burning and cross burning; pornography and coming out; racial taunts and AIDS education; using 'racial classifications' and remaining 'race blind': this book will provide constitutional and legislative debates about regulating these forms of 'injurious speech' with a brilliantly nuanced analysis of language as action. Butler has provided us with a sustained demonstration that we should fill in the moat that separates law schools from the human sciences, and quickly." -- Janet Halley, Stanford Law School

"In this relentlessly intelligent analysis of hate speech, Judith Butler proposes a speech act theory of verbal injury that is not dependent on the grammar of accountability. Cautioning against recourse to state speech to regulate hate speech, Butler argues that, since naming constitutes as well as devastates, injury cannot be cleanly and legalistically separated from recognition. This is what gives hate speech so much power to wound, but also what opens a space for turning misnaming to new purposes. There is never a slack moment in this brilliant book." -- Barbara Johnson, Harvard University

"In her extraordinary new book, Excitable Speech, Judith Butler…looks conceptually at speech, and she has plenty to say…Excitable Speech offers a thoughtful consideration of the ways in which speech and speaking are used by all points on the political spectrum to further political ends." -- The Bay Guardian

"Makes a valuable contribution…No one should ignore Judith Butler's analysis and conclusions." -- The Women's Review of Books

Judith Butler is Chancellor's Professor at the University of California, Berkeley. Her previous books include Gender Trouble (Routledge, 1990), and Bodies That Matter (Routledge, 1993).