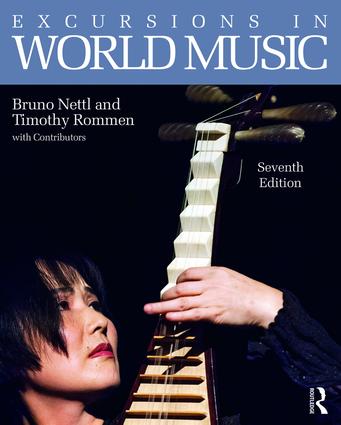 Excursions in World Music is a comprehensive introductory textbook to world music, creating a panoramic experience for students by engaging the many cultures around the globe and highlighting the sheer diversity to be experienced in the world of music. At the same time, the text illustrates the often profound ways through which a deeper exploration of these many different communities can reveal overlaps, shared horizons, and common concerns in spite of and, because of, this very diversity.

The new seventh edition introduces five brand new chapters, including chapters by three new contributors on the Middle East, South Asia, and Korea, as well as a new chapter on Latin America along with a new introduction written by Timothy Rommen. General updates have been made to other chapters, replacing visuals and updating charts/statistics. Excursions in World Music remains a favorite among ethnomusicologists who want students to explore the in-depth knowledge and scholarship that animates regional studies of world music.

A companion website is available at no additional charge. For instructors, there is a new test bank and instructor's manual. Numerous student resources are posted, including streamed audio tracks for most of the listening guides, interactive quizzes, ﬂashcards, and an interactive map with pinpoints of interest and activities. An ancillary package of a 3-CD set of audio tracks is available for separate purchase.

3. Music of the Middle East and North Africa (Richard Jankowsky)

11. Music in the Caribbean (Timothy Rommen)

Bruno Nettl is Professor Emeritus of Musicology at the University of Illinois School of Music, and recipient of the Charles Homer Haskins Prize (by the American Council of Learned Societies) as a distinguished humanist.

Timothy Rommen is Professor of Music and Africana Studies at University of Pennsylvania.