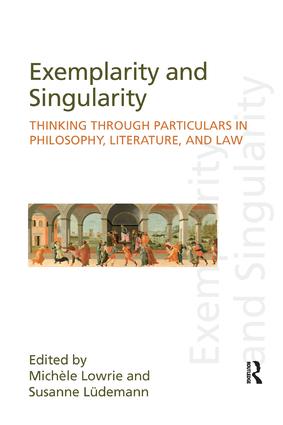 Thinking through Particulars in Philosophy, Literature, and Law, 1st Edition

This book pursues a strand in the history of thought – ranging from codified statutes to looser social expectations – that uses particulars, more specifically examples, to produce norms. Much intellectual history takes ancient Greece as a point of departure. But the practice of exemplarity is historically rooted firmly in ancient Roman rhetoric, oratory, literature, and law – genres that also secured its transmission. Their pragmatic approach results in a conceptualization of politics, social organization, philosophy, and law that is derived from the concrete. It is commonly supposed that, with the shift from pre-modern to modern ways of thinking – as modern knowledge came to privilege abstraction over exempla, the general over the particular – exemplarity lost its way. This book reveals the limits of this understanding. Tracing the role of exemplarity from Rome through to its influence on the fields of literature, politics, philosophy, psychoanalysis and law, it shows how Roman exemplarity has subsisted, not only as a figure of thought, but also as an alternative way to organize and to transmit knowledge.