Experiencing Drama in the English Renaissance
Readers and Audiences 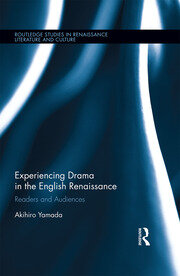 Experiencing Drama in the English Renaissance: Readers and Audiences

This book investigates the complex interactions, through experiencing drama, of readers and audiences in the English Renaissance.

Around 1500 an absolute majority of population was illiterate. Henry VIII’s religious reformation changed this cultural structure of society. ‘The Act for the Advancement of True Religion’ of 1543, which prohibited the people belonging to the lower classes of society as well as women from reading the Bible, rather suggests that there already existed a number of these folks actively engaged in reading. The Act did not ban the works of Chaucer and Gower and stories of men’s lives – good reading for them. The successive sovereigns’ educational policies also contributed to rising literacy.

This trend was speeded up by London’s growing population which invited the rise of commercial playhouses since 1567. Every citizen saw on average about seven performances every year: that is, about three per cent of London’s population saw a performance a day. From 1586 onwards merchants’ appearance in best-seller literature began to increase while stage representation of reading/writing scenes also increased and stimulated audiences towards reading. This was spurred by standardisation of the printing format of playbooks in the early 1580s and play-minded readers went to playbooks, eventually to create a class of playbook readers. Late in the 1590s, at last, playbooks matched with prose writings in ratio to all publications.

Parts I and II of this book discuss these topics in numerical terms as much as possible and Part III discusses some monumental characteristics of contemporary readers of Chapman, Ford, Marston and Shakespeare.

Introduction to Shakespeare and the Population of London

PART ONE: Authors/Playwrights, Readers and Theatre-goers: Their Mutual Interactions

Chapter 1: The Formation of a Class of Readers

Chapter 2: The Improvement of Literacy and its Reflection in Drama

Chapter 3: The Rise of Drama and the Birth of a Class of Readers of Drama

PART TWO: Playwrights, Playbook Readers and Printers/Publishers: Their Increasing Cooperation for the Unification of Forms of Dramatic Texts

Chapter 4: Changes in Form of Dramatic Texts: A Standardization

PART THREE: Playbook Readers and their Responses to the Text

Chapter 6: Readers of Drama—their Annotations (2): Play-Quartos and the First Folio of Shakespeare

Conclusion: The Zeal of Audiences and the Passion of Readers

A1: The Estimated Population of London: A Comparison between Yamada and Sutherland

A2: The Distribution Ratio of Minors’ Age-structure of the British Population in the Sixteenth and

A3: Principles for Table 8 concerning Plays which contain Scenes of, or References to, Reading and/or

A4: Shakespeare’s Plays: Their Dates and Proposers of Dates, &c.

"An important work of scholarship, this book shows that the flowering of English Renaissance drama produced or was in part fostered by, the emergence of a new class of readers. Shakespeare and his contemporaries wrote for readers as well as audiences and the modern age was born."

"For scholars interested in the problem of audiences and play reception, Akihiro Yamada's Experiencing Drama in the English Renaissance: Readers and Audiences is a perfect book to read since it takes up the question from the point of view of print, rather than performance."

"What is most striking on reading the book is its sheer level of detail as well as the scope of his [Yamada's] research."

"All in all, Experiencing Drama in the English Renaissance is a major scholarly achievement, attesting to the author's exceptional expertise in English Renaissance drama, bibliographical criticism and paleography. This book, with its numerous statistical tables and the bibliographic details presented in its main body and appendixes, provides invaluable information on the progress of literacy, the expansion of book readership, stationers' activities, dramatic audiences, and the performance and publication of drama in sixteenth- and seventeenth-century England, as well as on dramatic manuscripts and early modern readers of playbooks."