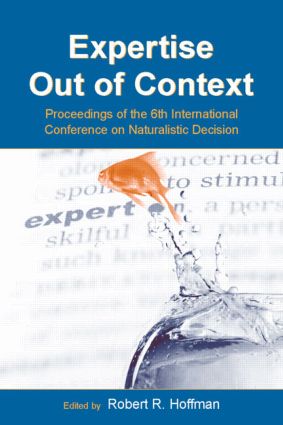 Expertise Out of Context

Researchers have revealed that real expertise, while applied to well-defined tasks with highly circumscribed contexts, often stretches beyond its routine boundaries. For example, a medical doctor may be called upon to diagnose a rare disease or perform emergency surgery outside his or her area of specialization because other experts are not available. Moreover, in some cases, the context for expertise is in a constant state of flux, such that no one case is identical. Expertise Out of Context is a culmination of some of the most insightful studies conducted by researchers in the fields of cognitive systems engineering and naturalistic decision making in the effort to better understand expertise and its development.

Born out of the Sixth International Conference on Naturalistic Decision Making, a conference that gathers researchers who study cognition, perception, and reasoning outside of the traditional laboratory, this book is organized in five parts, the first of which provides an overview of the topic and presents varied perspectives. Consequent sections cover how to make sense of things, tools for thinking out of context, how to cope with uncertainty in a changing workplace, and teams operating out of context.

As researchers in naturalistic decision making have investigated such areas as the knowledge and decision-making skills of expert firefighters, critical care nurses, military commanders, and aircraft pilots, this volume is of importance to an expansive audience, including individuals in business, government, industry, and society at large.