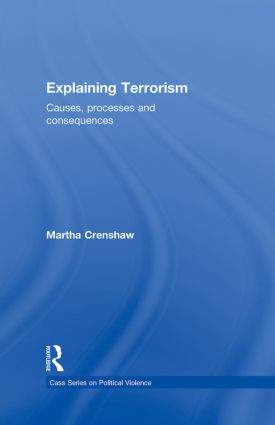 This volume comprises some of the key essays by Professor Crenshaw, from 1972 to the present-day, on the causes, processes and consequences of terrorism.

Since the early 1970s, scholars and practitioners have tried to explain terrorism and to assess the effectiveness of government responses to the threat. From its beginnings in a small handful of analytical studies, the research field has expanded to thousands of entries, with an enormous spike following the 9/11 attacks. The field of terrorism studies is now impressive in terms of quantity, scope, and variety. Professor Crenshaw had studied terrorism since the late 1960s, well before it was topical, and this selection of her work represents the development of her thought over time in four areas:

This collection of essays by one of the pioneering thinkers in the field of terrorism studies will be essential reading for all students of political violence and terrorism, security studies and IR/politics in general.

'The leading global thinker on the study of terrorism, Martha Crenshaw has for thirty years produced the most creative, rigorous and important contributions our field has known. And now these can all be found in one place. This book is simply the one indispensable text that every student, scholar and researcher of terrorism and political violence must have. Literally the best of the best.' - John Horgan, Pennsylvania State University, USA

‘Explaining terrorism requires an interdisciplinary approach able to address contextual causes, organizational dynamics and individual motifs. This combination of different levels of the analysis has been at the core of Martha Crenshaw's influential contributions to the field of terrorism study, the best of which are now collected in this precious volume.’ - Donatella della Porta, European University Institute, Florence, Italy

'When it comes to the study of terrorism from a genuine social science perspective, professor Martha Crenshaw is the scholar of reference and became so long before the field gained academic centrality worldwide after 9/11.' - Fernando Reinares, Universidad Rey Juan Carlos, Madrid, Spain

"In this important volume, the author, a prominent academic expert on terrorism, has assembled her articles, many of which were previously published in the 1980s and 1990s, with a few published after 2001. The result is a comprehensive compilation that is divided into four parts" - Joshua Sinai, ‘Terrorism Bookshelf: Top 150 Books on Terrorism and Counterterrorism’, Perspectives on Terrorism, Vol. 6, No. 2 (2012)

Introduction: Definitions, Approaches, Trajectories, and Responses Part 1: What and Why? 1. The Concept of Terrorism 2. The Causes of Terrorism 3. "Old" vs. "New" Terrorism Part 2: Explaining Terrorism: Organizations, Strategies, and Psychology 4. The Organizational Approach 5. Subjective Realities 6. The Logic of Terrorism 7. Psychological Constraints on Instrumental Reasoning Part 3: Responding to Terrorism 8. Coercive Diplomacy 9. Strategies and Grand Strategies 10. Counterterrorism Policy and the Political Process Part 4: How Terrorism Ends 11. How Terrorism Declines 12. Why Terrorism is Rejected or Renounced

Martha Crenshaw is a Senior Fellow at the Center for International Security and Cooperation (CISAC) and the Freeman Spogli Institute for International Studies, and Professor of Political Science, by courtesy, at Stanford University. She is also Professor of Government Emerita at Wesleyan University. She is a lead investigator with the National Consortium for the Study of Terrorism and Responses to Terrorism (START) at the University of Maryland.