Facts and Values
The Ethics and Metaphysics of Normativity 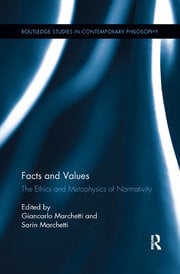 Facts and Values: The Ethics and Metaphysics of Normativity

This collection offers a synoptic view of current philosophical debates concerning the relationship between facts and values, bringing together a wide spectrum of contributors committed to testing the validity of this dichotomy, exploring alternatives, and assessing their implications. The assumption that facts and values inhabit distinct, unbridgeable conceptual and experiential domains has long dominated scientific and philosophical discourse, but this separation has been seriously called into question from a number of corners. The original essays here collected offer a diversity of responses to fact-value dichotomy, including contributions from Hilary Putnam and Ruth Anna Putnam who are rightly credited with revitalizing philosophical interest in this alleged opposition. Both they, and many of our contributors, are in agreement that the relationship between epistemic developments and evaluative attitudes cannot be framed as a conflict between descriptive and normative understanding. Each chapter demonstrates how and why contrapositions between science and ethics, between facts and values, and between objective and subjective are false dichotomies. Values cannot simply be separated from reason. Facts and Values will therefore prove essential reading for analytic and continental philosophers alike, for theorists of ethics and meta-ethics, and for philosophers of economics and law.

Behind and Beyond the Fact-Value Dichotomy

Part I: A Counter-History of the Dichotomy

1. The Fact/Value Dichotomy and the Future of Philosophy

3. Contingency and Objectivity in Critical Social Theory: Horkheimer and Habermas

4. From the Positivismusstreit to Putnam: Facts and Values in the Shadow of Dichotomy

7. Change in View: Sensitivity to Facts and Prospective Rationality

8. Normativity without Normative Facts? A Critique of Cognitivist Expressivism

11. Science and the Value of Objectivity

12. The Environment and The Background of Human Life: Nature, Facts, and Values

is Assistant Professor of Philosophy at Sapienza Università di Roma, Italy. He is the author of Ethics and Philosophical Critique in William James (2015) and William James (2017), and co-editor of Pragmatism and the European Traditions: Encounters with Analytic Philosophy and Phenomenology Before the Great Divide (2017).

"There are several excellent papers here, worth reading irrespective of their thematic connections ... It provides an invigorating introduction to a vast range of debates concerning the supposed fact/value dichotomy." - Notre Dame Philosophical Reviews

"The concept of normativity spans a series of interrelated dichotomies that lie at the heart of philosophical inquiry: fact and value, is and ought, the objective and the subjective, causes and reasons, the natural world and human sensibilities. Much philosophical effort has been devoted to accentuating the gaps between the concepts juxtaposed by each of these pairs, and the fallacies involved in their conflation. This volume, however, seeks to bridge these gaps. The papers collected here—all written expressly for this volume—set out to show that normative discourse must be sensitive to the facts, and that reasoning about facts is inherently value-laden. They demonstrate that the descriptive and the normative meet in language, in expressions that are both descriptive and normative. And they highlight the objective aspects of moral reasoning, and the normative aspects of objectivity. These challenges to the traditional view are as relevant to social and political discourse as they are to philosophy" - Yemima Ben-Menahem, The Hebrew University of Jerusalem

"This distinguished volume of essays draws creatively on several rich traditions in philosophy—including Wittgenstein, Murdoch, philosophy of law, critical social theory, and Deweyan and Peircean pragmatism—to bring together an important variety of new challenges to the supposed "fact/value gap" and its alleged consequences for philosophy. For all those who want think harder and deeper about "fact and value", it will be essential reading" - Sophie-Grace Chappell, Open University

"Marchetti and Marchetti have gathered here a comprehensive collection of positions critical of the coherence of the fact/value dichotomy; each coming at the problem from a different perspective; each offering a different (dis)solution. Their introductory overview of the origins of the dichotomy in the western philosophic tradition is valuable, tying together the various strands, from Hume through Russell, that have provided support for the distinction in its current emotivist and non-cognitivist forms. The collection is also noteworthy for its attention to the critical voices found in the American pragmatist tradition and taken up by a number of contemporary thinkers whose work is represented here, such as Hilary Putnam" - Sharyn Clough, Oregon State University

"Explicit interest in questions about the relation between facts and values has waxed and waned, inside and outside the academy, over the last several decades. But the questions themselves, which often turn up under different labels, remain immediately relevant both to our efforts to do justice to the world and to ethical challenges we confront within it. Marchetti and Marchetti have given us a collection that clearly brings out the importance of fact-value debates while also stressing the debates’ multifaceted character. Taken together, these essays – from a group of distinguished thinkers – offer not only a helpful tour of the complexity of the issues but also a forceful impression of how and why they matter today" - Alice Crary, The New School

"That there is a clear and unequivocal distinction between facts and values is something all too often assumed and only very seldom actively interrogated. Facts and Values takes up this question from a range of philosophical perspectives (including but not restricted to the ‘analytic’) that nevertheless converge in their rejection of the idea that the distinction can be given any unqualified application. This has important consequences, allowing us to recognise, for instance, the interconnection between ethics and ontology, and forcing us also to acknowledge the way in which evaluative commitments are inextricably bound up with all of our engagements in the world. The volume provides both an excellent point of entry into the topic at the same time as it also sets out important new insights and approaches. It contains contributions from many key figures in the area, but is especially notable for including one of the last pieces of writing by a seminal thinker of the last fifty years, Hilary Putnam, who together with Ruth Anna Putnam, has been central in bringing philosophical attention back to this important question" - Jeff Malpas, Univerity of Tasmania

"Throughout the history of analytic philosophy, the fact-value distinction has been baked into nearly every research program within the tradition. Hilary Putnam has shown that we had better not just assume that the distinction -- or its sophisticated variants, e.g., the contrast between science and ethics -- can be sustained.  If it cannot, there is a great deal of rethinking to be done, both across the many philosophical subspecializations and in the broader intellectual culture. This collection keeps this very important ball rolling, advancing an agenda with the potential to reshape philosophy." - Elijah Millgram, University of Utah

"For professional philosophers this is a very welcome addition to existing debates on the fact-value distinction, so those we care about overcoming this distinction in ethics, law, science, epistemology, or metaphysics should check out this book." - Raff Donelson, Metapyschology Online