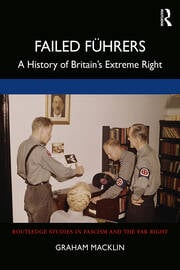 This book provides a comprehensive history of the ideas and ideologues associated with the racial fascist tradition in Britain. It charts the evolution of the British extreme right from its post-war genesis after 1918 to its present-day incarnations, and details the ideological and strategic evolution of British fascism through the prism of its principal leaders and the movements with which they were associated.

Taking a collective biographical approach, the book focuses on the political careers of six principal ideologues and leaders, Arnold Leese (1878–1956); Sir Oswald Mosley (1896–1980); A.K. Chesterton (1899–1973); Colin Jordan (1923–2009); John Tyndall (1934–2005); and Nick Griffin (1959–), in order to study the evolution of the racial ideology of British fascism, from overtly biological conceptions of ‘white supremacy’ through ‘racial nationalism’ and latterly to ‘cultural’ arguments regarding ‘ethno-nationalism’.

Drawing on extensive archival research and often obscure primary texts and propaganda as well as the official records of the British government and its security services, this is the definitive historical account of Britain’s extreme right and will be essential reading for all students and scholars of race relations, extremism and fascism.

Chapter 5 – John Tyndall: In pursuit of the ‘Anglo-Saxon Reich’

Chapter 6 – Nick Griffin: From the ‘Third Position’ to anti-Muslim ‘populism’... and back again

Graham Macklin is Assistant Professor/Postdoctoral Fellow at the Center for Research on Extremism (C-REX) at the University of Oslo, Norway. He has published extensively on extreme right-wing and anti-minority politics in Britain in both the inter-war and post-war periods including Very Deeply Dyed in the Black: Sir Oswald Mosley and the Resurrection of British Fascism after 1945 (2007), British National Party: Contemporary Perspectives (2011), co-edited with Nigel Copsey, Failed Führers: A History of Britain’s Extreme Right (2020), and Researching the Far Right: Theory, Method and Practice (2020) co-edited with Stephen Ashe, Joel Busher and Aaron Winter. Macklin co-edits 'Patterns of Prejudice, Fascism' and the ‘Routledge Studies in Fascism and the Far Right’ book series.

'This is an original, deeply researched and very readable book by the leading scholar of British fascism. It makes an extremely valuable contribution to our understanding of the British fascist tradition.' — Professor Roger Eatwell, University of Bath, UK

'By introducing a biographical approach to reveal the diversity of the visions of national rebirth adopted by six British fascists over nearly a century, Graham Macklin puts welcome flesh on the abstract formula and abstruse generalisations that have too often plagued fascist studies in the past, and simultaneously reveals the transnational nature of the fascist project in the minds of its most ardent believers. Hopefully, Macklin’s impressively researched and thoughtful biographical study will inspire a new genre of fascist studies.' — Professor Roger Griffin, Oxford Brookes University, UK.

'Failed Führers offers us something remarkable, a synoptic overview of the British far right firmly rooted in the granular detail of narrative biography. A maestro of British archives, Macklin brilliantly illuminates the shady saga of a rogues gallery of fanatics from Arnold Leese and Oswald Mosley to Colin Jordan and Nick Griffin. Failed Führers is a must read for anyone concerned about fascism, past, present, . . . and future?' — Kevin Coogan, author of Dreamer of the Day: Francis Parker Yockey and the Postwar Fascist International

"This is a readable and well-researched book from one of the leading scholars of British fascism. Dr Macklin’s thesis centres on six meticulous case studies of leading British fascists, usefully setting their stories in a wider international context. With neo-fascism and the authoritarian and exclusionist populist right on the rise across the globe, this is an engaging and timely reminder to keep our eyes on the past, in order to better understand the unstable present." — Dr David Baker, Warwick University, UK (Retired)

"With spectacular archival depth, Failed Führers convincingly shows how continuities in far right ideologies and movements are constructed and sustained as each generation’s ideologues are shaped by trajectories of influence from key mentors to emergent proteges. A brilliant intervention into understandings of the historical and contemporary extreme right." — Cynthia Miller-Idriss, American University, USA

"Failed Fuhrers provides an important and timely contribution for historians, social scientists, and the general public by offering a comprehensive account of the historical evolution of the far right in Britain. His account is layered and nuanced reflecting a deep understanding of the topic. Macklin’s manuscript is an important accomplishment and I highly recommend this book for anyone serious about understanding the far right." — Peter Simi, Chapman University, USA

"The history of British fascism is a history of failure. In a new book, Failed Führers, the historian Graham Macklin retells that story through biographies of six fascist leaders. British fascism is a story as much of continuity as of change – an ever-present obsession with racial purity, venomous antisemitism and the undertow of violence. It is also, for all the political irrelevance of British fascists, a story whose lessons are worth pondering." - Kenan Malik, The Guardian.

"This book recounts the lives and work of six of Britain’s most important fascists, from Arnold Leese in the 1920s to Nick Griffin, and through their lives, tells the story of fascism in Britain. Macklin is an academic, but he writes clearly and simply. His method is not to make judgments, but to report what is said and done and let the facts speak for themselves, which they do." - Francis Beckett, The Spectator.

"This is always going to be my generation's 'big book' on British fascism.  Failed Führers deserves to be presented to students as the new standard study of British fascism. This is a superbly researched book and an important one. No-one is going to surpass Macklin's treatment of these six leaders." - David Renton, author of Fascism and The New Authoritarians.

"The story of the British extreme right, as told in Failed Führers, is, as the title suggests, one of perpetual disappointment, only lightened by occasional, fleeting moments of comparative success....Macklin’s study is the product of exhaustive research. He has a light touch, however, and often gives, by a simple acerbic remark, a sign of the distance he keeps between himself and his subject." - Richard Griffiths, The Critic.