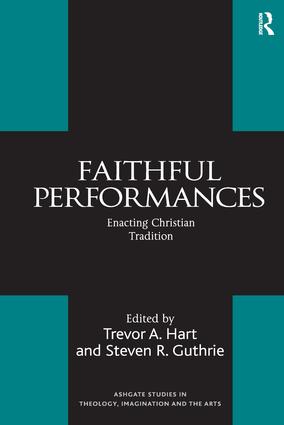 Edited by Trevor A. Hart

The metaphor of performance has been applied fruitfully by anthropologists and other social theorists to different aspects of human social existence, and furnishes a potentially helpful model in terms of which to think theologically about Christian life. After an introductory editorial chapter reflecting on the nature of artistic performance and its relationship to the notions of tradition and identity, Part One of this book attends specifically to the phenomenon of dramatic performance and possible theological applications of it. Part Two considers various aspects of the performance of Christian identity, looking at worship, the interpretation of the Bible, Christian response to elements in the contemporary media, the shape of Christian moral life, and ending with a theological reflection on the shape of personal identity, correlating it with the theatrical metaphors of 'character' and 'performing a part' in a scripted drama. Part Three demonstrates how art forms (including some technically non-performative ones - literature, poetry, painting) may constitute faithful Christian practices in which the tradition is authentically 'performed', producing works which break open its meaning in profound new ways for a constantly shifting context.

Trevor A. Hart is Professor of Divinity and Principal of St Mary's College, University of St Andrews, UK. He is Director of the Institute for Theology, Imagination and the Arts. Steven R. Guthrie is Lecturer in Theology at Belmont University, Nashville, USA.

Routledge Studies in Theology, Imagination and the Arts

What have imagination and the arts to do with theology? For much of the modern era, the answer has been 'not much'. It is precisely this deficit that this series seeks to redress. For, whatever role they have or have not been granted in the theological disciplines, imagination and the arts are undeniably bound up with how we as human beings think, learn and communicate, engage with and respond to our physical and social environments and, in particular, our awareness and experience of that which transcends our own creatureliness. The arts are playing an increasingly significant role in the way people come to terms with the world; at the same time, artists of many disciplines are showing a willingness to engage with religious or theological themes. A spate of publications and courses in many educational institutions has already established this field as one of fast-growing concern. This series taps into a burgeoning intellectual concern on both sides of the Atlantic and beyond. The peculiar inter-disciplinarity of theology, and the growing interest in imagination and the arts in many different fields of human concern, afford the opportunity for a series that has its roots sunk in varied and diverse intellectual soils, while focused around a coherent theological question: How are imagination and the arts involved in the shaping and reshaping of our humanity as part of the creative and redemptive purposes of God, and what roles do they perform in the theological enterprise? Many projects within the series have particular links to the work of the Institute for Theology, Imagination and the Arts in the University of St Andrews, and to the Duke Initiatives in Theology and the Arts at Duke University.