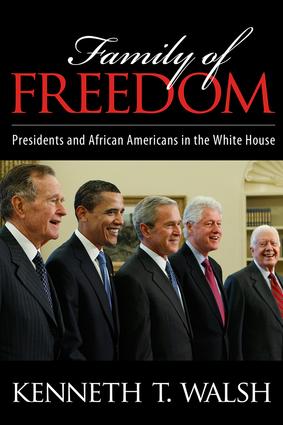 Presidents and African Americans in the White House, 1st Edition

"A keen sense of presidential history combined with meticulous reporting have been hallmarks of Ken Walsh's work. This book brings to life intimate and meaningful moments shared between American presidents and the African Americans who have worked closely with them. He sheds a first light on countless remarkable moments and contributions. Those privileged to work in and around the White House have benefited immeasurably from the dedication of the people featured in this volume and have stood on their shoulders. How these stories were pried loose may be a tale in itself.”

"Walsh draws on his extensive experience covering the White House as a journalist to examine the history of the presidency through the lens of the African American experience—from slavery through civil rights. The result is a compelling history of race relations in American politics. Readers interested in the history of the presidency, White House, and civil rights will find much of interest in Walsh's well-researched study."

“Walsh draws on the telling memoirs and recollections of the domestic staff as a window onto the personal behavior of presidents and first ladies . . . underscor[ing] the cumulative consequences of more than two centuries of slavery and racial segregation as evident in fractured politics, distorted historical memories, and persistent racial divisions and inequities.”

“A solid summary of black history as it relates to the executive mansion.”

“Ken Walsh knows the White House better than most of the reporters who cover it, and here he gives us a rich history about that place that factors in the uniquely American subject of race. Our history is so affected by race but little do people know about folks who are black who made such an impact on a house called White. Ken’s work will give them fresh insights at a time when we are all stirred by a White House newly and profoundly integrated for the first time in our history.”

“Kenneth Walsh has established himself as a leading American presidential historian on such subjects as the press and family homes. Family of Freedom takes on the controversial topic of presidential attitudes and policies toward race. Its anecdotes are fascinating, but there will be critics. So read it carefully and check your blood pressure from time to time.”

"Ken Walsh has conducted us into a unique and fascinating corner of American history, the long and continuous connection between African Americans and the White House. The very obvious presence of the presidential mansion's current resident is only a small part of the story, although Walsh's interviews with President Obama are rich and revealing. Bringing to this book an instinct that comes from having long covered the White House along with a keen appreciation of history, Ken Walsh tells us a stirring and often touching American story.”

"What a fascinating read. Ken Walsh's Family of Freedom is a deeply illuminating look at how African Americans have interacted with the White House since the dark days of slavery to Barack Obama's ascendancy as our 44th president. Walsh does a marvelous job of tracing the currents of every era. An essential book for everybody's library."