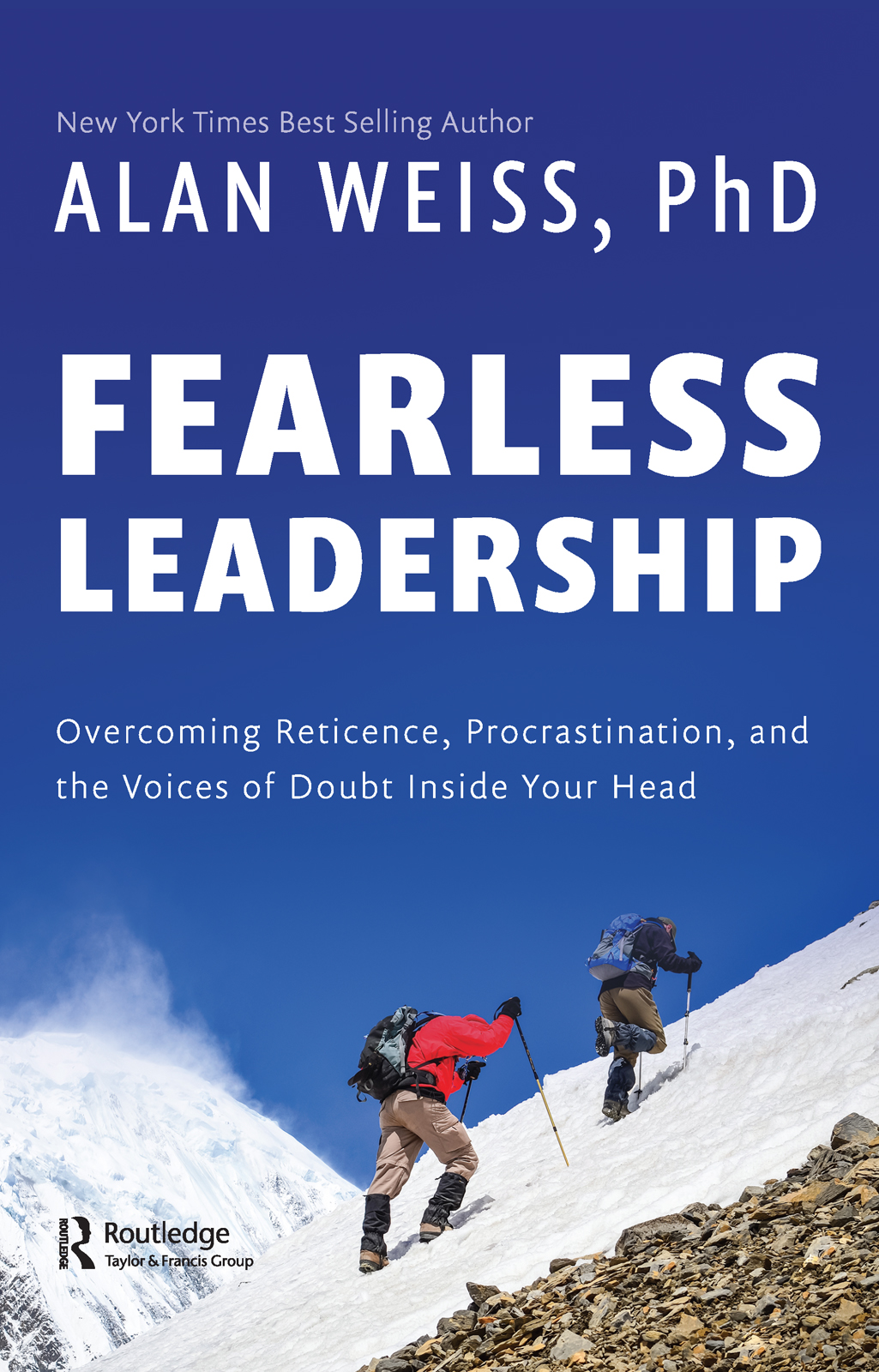 Overcoming Reticence, Procrastination, and the Voices of Doubt Inside Your Head, 1st Edition

The intent of this book -- the author's goal for you — is to understand the baseless underpinnings of almost all our fears. You read that correctly -- almost all our fears -- and therefore to discard them. The author has expertly coached leaders and managers in the discovery of, examination of, elimination of, and sustained freedom from fears.

We all know people who are charming and articulate, but flounder on a stage addressing colleagues; musicians who master intricate scores but can’t play the basics when asked to solo; athletes who "choke"; business people who are strong until it comes time to ask for the business; people who consistently feel like "imposters."

We are far better at dealing with external, tangible fears than our own imagined ones. We purchase insurance, watch the safety demonstrations, know how to use the Heimlich Maneuver. But those are responses to rare and often never-occurring emergencies. Our mythical and monstrous fears are daily dark clouds, masking our talents no less than depression or guilt.

It’s time to realize there is no monster under the bed, never has been, and never will be without having to check nightly and without needing a weapon on the night table. Picture yourself freed of restraints that you could never properly articulate and were loath to discuss, but which you carried on your shoulders constantly, a dead weight, nonetheless.

Essentially, this book is for entrepreneurs, business owners, and those who seek a better position for themselves and their talents, but who procrastinate, delay, and hang back. It’s about isolating and overcoming the internal fears that we generate every day like a geyser, triggered by time, events, or shifts in the environment. We are our own worst enemies and we ignore the practical remedies to escape fear because we use our energies instead on blaming everyone else.

Other Books by Alan Weiss. Introduction. Acknowledgments. Dedication. Chapter 1: Real fear and fraudulent fear. The tyrannosaurus and the tyrant. Fight, flee, fright. Appropriate actions begin with rational beliefs. Fear is a learned behavior. The guy on your shoulder. Chapter 2: The origins of your current fears. What your parents told you and didn’t tell you. Norms vs. beliefs. The baggage that must be discarded. Who the hell are you listening to? Chapter 3: Manifestations of fear. Procrastination. Passive/aggressive behavior. Blending into the wallpaper. Can’t-Pull-the-Trigger Syndrome. Refusal to leave the nest. Chapter 4: Erasing past fears. The evidentiary test. Transitioning to current reality. Asking "Why?" The curse of rumination. Chapter 5: Preventing future fears. Avoiding "dread." Establishing resilience. The joys and lessons of failure. Why worry about what you can’t control? Chapter 6: Changing your metrics. Never compare yourself to your cousin. Excellence trumps perfection. All things are relative, just ask the person behind you. How to fearlessly become number one. Chapter 7: Organizing fearlessness. Churchill was very accurate but they still threw him out. When to hold, when to fold, when it’s gold. The fearless posture. Home is different from work, or it had better be. Chapter 8: Your fearless future. Maintaining a fearless demeanor. Dealing with volatility and disruption. Taking the blow. Constant recovery and success. The guy on your shoulder redux. Resources. Self-Test. About the Author.

Alan Weiss is one of those rare people who can say he is a consultant, speaker, and author and mean it. His consulting firm, Summit Consulting Group, Inc., has attracted clients such as Merck, Hewlett-Packard, GE, Mercedes-Benz, State Street Corporation, Times Mirror Group, The Federal Reserve, The New York Times Corporation, Toyota, and over 500 other leading organizations. He has served on the boards of directors of the Trinity Repertory Company, a Tony-Award-winning New England regional theater, Festival Ballet where is his President of the Board of Directors, and Chaired the Newport International Film Festival.

He is an inductee into the Professional Speaking Hall of Fame® and the concurrent recipient of the National Speakers Association Council of Peers Award of Excellence, representing the top 1% of professional speakers in the world. He has been named a Fellow of the Institute of Management Consultants, one of only two people in history holding both those designations. He has written more books on consulting than anyone else.

His prolific publishing includes over 500 articles and 64 books, including his best-seller, Million Dollar Consulting (from McGraw-Hill). His most recent before this one are Million Maverick, Lifestorming (with Marshall Goldsmith), and Threescore and More. His books have been on the curricula at Villanova, Temple University, UC Berkeley, Temple, and the Wharton School of Business, and have been translated into 15 languages.

He is the recipient of the Lifetime Achievement Award of the American Press Institute, the first-ever for a non-journalist, and one of only seven awarded in the 65-year history of the association.

Alan is married to the lovely Maria for 51 years, and they have two children and twin granddaughters. They reside in East Greenwich, RI with their dogs, Coco and Bentley, a white German Shepherd.

You can acquire free text, audio, and video materials at Alan’s site, alanweiss.com, as well as access his blog, Contrarian Consulting, and his podcast, The Uncomfortable Truth.