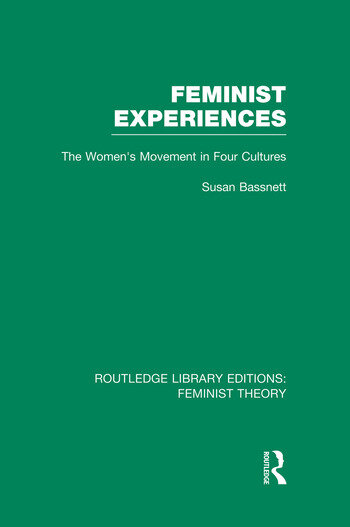 The Women’s Movement is usually referred to as if it were a constant, global phenomenon. There are women’s movements in Europe, North and South America, Africa, the Middle East, India, Japan and Australia, and many women and men assume that they are regional manifestations of the same thing, and share a common core.

Susan Bassnett has lived and been involved in the struggles of the women’s movement in the United States, Italy and the United Kingdom, and has had extensive contacts with feminists in the German Democratic Republic. On the basis of her personal experiences and study of women’s history and literature in these countries she is able to present a striking picture of the variety of feminist aims, tactics and priorities in the four countries, and of the character of the women’s movement in four very different cultures.

In Italy, she focuses on the violence of the women’s movement – its intellectualism and energy. In analysing the American women’s movement she dwells on its roots in the past, and its faith in pragmatic solutions. The GDR presents completely different questions, hinging on the relationship between state socialism and feminism. In the UK, Susan Bassnett finds herself returning to that all-pervasive aspect of British life – class, and its importance for feminists.

Throughout, the author writes with a double commitment: first, to furthering our understanding of the diversity of aims of women’s movements and their common ground – the no-man’s land of female existence; second, to making her book as accessible as possible to all feminists, through drawing on her own personal experience of countries in which she has lived, worked, travelled, and made friends.