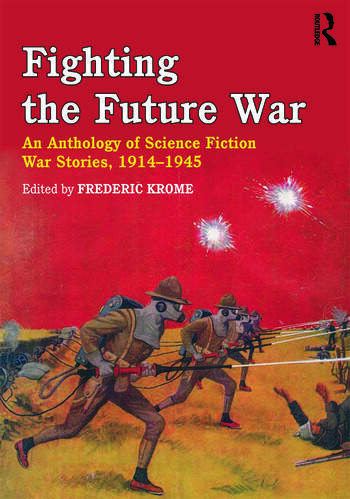 The period between World War I and World War II was one of intense change. Everything was modernizing, including our technology for making war—witness machine guns, trench warfare, biological agents, and ultimately The Final Solution. This modernization and eye toward the future was reflected in many facets of pop culture, including fashion, home-wear design, and the popular literature of the time. In sci-fi, a specific genre emerged—that of the ‘future war.’

Fred Krome has collected many of these future war stories together for the first time in Fighting the Future War. Bolstered by a comprehensive introduction, and introduced with historical information about both the authors of the stories and the historical time period, these stories provide a view into the field of pulp science fiction writing, the issues that informed the time period between the world wars, and the way people envisioned the wars of tomorrow. Revealing anxieties about society, technology, race and politics, the genre of the future war story is important material for students of history and literature.

Chapter One: Hugo Gernsback and World War I.

Chapter Two: The Future War Story during World War I

Chapter Three: The Inter-war Years and the Rise of the Airmen

David Lasser, "The Rocket and the Next War" (Presidential Address, American Rocket Society, 1931)

Nat Schachner, "The Revolt of the Scientists," (Wonder Stories, April 1933)

Chapter Four: The Ambivalence of Science: Technology and Armageddon

Chapter Five: After the Future War

C.L. Moore, "There Shall be Darkness," (Astounding Science Fiction, February 1942)

Frederic Krome is an Assistant Professor of History at the University of Cincinnati, Clermont College.

'Krome’s Fighting the Future War makes a valuable contribution to the history of science fiction as seen in its treatment of a particular scenario: the war story. Science-fiction fans and scholars will find it a convenient source for some interesting material that has hitherto not been reprinted.'- Stephen Curley, Journal of American Culture

'Frederick Krome’s Fighting the Future War is a remarkable and useful anthology of American sf stories selected to support Clarke’s thesis…it richly renders that early pulp era without forced enthusiasms and without condescension or irony. I should think this would make a terrific teaching anthology.' - John Huntington, Science Fiction Studies