Financial Reform in China
The Way from Extraction to Inclusion 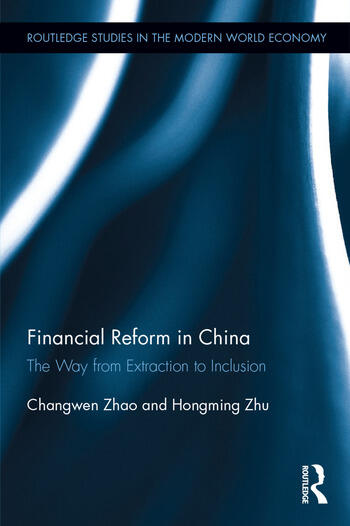 Financial Reform in China: The Way from Extraction to Inclusion

This book focuses on the importance for China to correct the present imbalance in the relationship between the financial sector and the real economy.

The book looks at China’s current financial system in terms of "extractive" and "inclusive". It asserts that the financial sector is producing huge "siphonic effects" that distort the overall development of the Chinese economy. Like a giant magnet, the financial sector attracts too many innovation factors, such as talents, capital and entrepreneurship away from the real economy and inhibits the development of the latter. Hence, the book argues that China’s financial system must now be thoroughly reformed to become an inclusive financial system, where finance and the rest of the economy can co-exist and develop in support of each other.

1. From Extraction to Inclusion: A New Analytical Framework

4. The Formation of "Extractive" Financial Systems

7. Withdrawal of the Financial Restraint System: Reform of the financial system

8. Withdrawal of the Implicit Guarantee: Supportive reforms in other sectors

Changwen Zhao is Research Fellow and Director-General of the Research Department of Industrial Economy of the Development Research Center of the State Council (DRC), China.

'Before the 2008 financial crisis there was a mistaken global consensus that more finance was always good for economic development. But we realise now that too much finance, and the wrong sort of finance, can cause harm, extracting too much profit from the real economy and driving misallocation of capital. As Zhao Changwen and Zhu Hongming illustrate in this important and insightful book, these problems are already serious within the Chinese economy. Zhao and Zhu present clear analysis of the underlying causes and argue persuasively for the policy changes needed if China's financial system is to serve well the needs of the Chinese real economy.' — Adair Turner, Former Chairman of UK Financial Services Authority, and Author of Between Debt and the Devil

'As a part of service industry, finance serves to support the real economy. But it may well alienate itself into an extractive systematic arrangement, which may lead investment from the real economy into the virtual economy, deteriorate the economic stability and health and even trigger serious financial crisis. Taking the perspective of coopetition as a framework, this book analyzes China’s status quo of the inclusion of over- and under-development of the financial system. It proposes a series of insights and recommendations regarding how to avoid the mentioned alienation and how to construct a system with the inclusion of finance and real economy when we make efforts to deepen the all-around reform. This books offers quite a number of unique and insightful analysis and policy recommendations, worthy of attention and probing from the academic circle and decision-makers.'

'Professor Acemoglu and Professor Robinson suggest in a series of their publications that inclusive system lays the foundation for sustained prosperity while extractive system cannot bring about sustained growth. By adopting these two concepts, the book Financial Reform in China: The Way from Extraction to Inclusion explores the parallel situation of under- and over-development of finance in China and proposes a series of policy recommendations regarding financial reform. These insightful observations are original among the heated debate over the reform, and enlightening for exploring the reform of the financial system. Committed study of the systematic analysis proposed in the book will certainly contribute to a deeper understanding of the problems in financial development of China, and a better response to the challenges there are.'