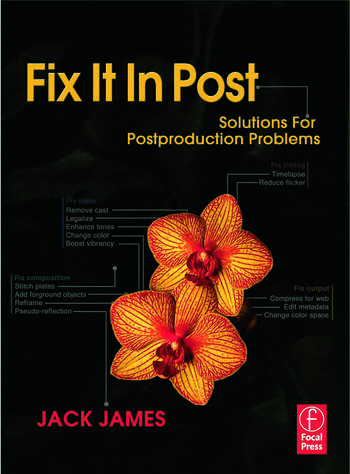 This book provides an array of concise solutions to the wide variety of problems that are faced by postproduction artists in the post process. With an application-agnostic approach, it gives proven, step-by-step methods to solving the most frequently encountered postproduction problems. Also included is access to a free, password-protected website that features application-specific resolutions to the problems presented, with fixes for working in Apple's Final Cut Studio suite, Avid's Media Composer, Adobe Premiere Pro, as well as other applications. Lessons are enhanced through eye-catching 4 color illustrations throughout. Solutions are provided for common audio, video, digital, editorial, color, timing and compositing problems, such as, but not limited to:* automated dialogue replacement, adjusting sync, and correcting pitch * turning SD into HD (and vice-versa) and restoration of old film for video* removing duplicate frames, repairing corrupt frames, and anti-aliasing * maintaining continuity, removing soft cuts, and troubleshooting timecodes* adding vignettes, removing color casts, and legalizing color* speeding shots up or slowing shots down, and smoothing timelapse* reframing shots, sky replacement, and object addition or removalThe book is presented in a "cookbook" format, allowing you to reference your exact problem in the TOC or index, go to that section, and immediately implement the solution featured.

After working for some time in the field of computer animation, Jack went to work for Kodak's brand-new Cinesite Digital Lab. It was the first of its kind anywhere in the world, the aim being to reproduce all laboratory processes in the digital domain. It remains one of the leading post-production houses that uses digital intermediates. While at Cinesite, Jack worked on HBO's "Band of Brothers," which incorporated 10 hours of finished film, all to be scanned, edited and finished digitally. He was a member of the team that established and designed procedures and protocols which later became industry-standard. His core expertise is in establishing workflows of data management, film restoration, and conforming (making sure the final edit matches exactly what the editor of a film has cut--procedures which have widely been adopted elsewhere. Since leaving Cinesite, Jack has worked on the digital intermediates of many feature films including Miramax's "Cold Mountain."