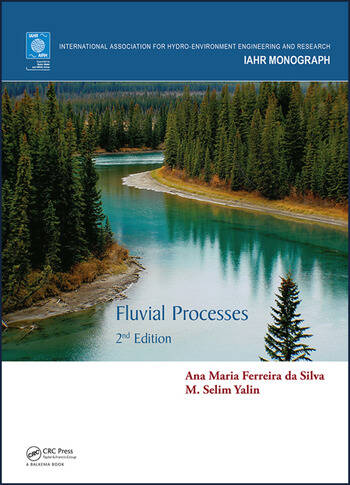 A stream flowing in alluvium deforms its bed surface, forming ripples, dunes, bars, etc., and, in many instances, it deforms its channel entirely, thereby creating meandering or braiding patterns. It could be said that, in general, an alluvial stream and its deformable boundary undergo a variety of fluvial processes leading to the emergence of a multitude of alluvial forms.

This book concerns the physics and analytical treatment of various fluvial processes and the associated alluvial bed and plan forms listed above. Following an introductory chapter on the basics of turbulent flow and sediment transport, the book covers the origin, geometric characteristics and effects of bed forms, from small- to meso-scale (ripples, dunes, alternate and multiple bars); the initiation, geometry and mechanics of meandering streams; the computation of flow, bed deformation and the planimetric evolution of meandering streams; and braiding and delta formation. The book also covers the regime concept, the time-development of a stream towards its regime state, and the formulation of stable, or equilibrium, morphology. The book distinguishes itself by its comprehensive analysis and discussion of key processes involved in large-scale river morphodynamics.

The book was written primarily for researchers and graduate students of hydraulic engineering, water resources and related branches of earth sciences, but it will also prove useful for river engineers and managers.

Ana Maria Ferreira da Silva obtained her first degree in Civil Engineering from the University of Oporto, Portugal, in 1985. For the next three years she worked as a Research Officer for the Hydraulics Division of the National Laboratory of Civil Engineering (LNEC), Lisbon, Portugal. She moved to Canada in 1989, where she obtained her M.Sc. and Ph.D. degrees also in Civil Engineering from Queen’s University at Kingston, Ontario, in 1991 and 1995, respectively. She subsequently held the positions of Research Engineer at the Hydraulics Laboratory of the U.S. Army Corps of Engineers Waterways Experiment Station, Vicksburg, Mississippi, until 1997, and Assistant Professor at the University of Windsor, Canada, until 2000. She joined Queen’s University at Kingston in 2000 as an Associate Professor, and is currently a Full Professor at the same university. Her expertise includes sediment transport, fluvial hydraulics, and river morphology and morphodynamics. Prof. da Silva authored and co-authored over 100 journal and conference papers and 3 book chapters, covering primarily aspects of large-scale river turbulence, fluvial hydraulics and large-scale river morphodynamics. She formerly was an Associate Editor of the ASCE Journal of Hydraulic Engineering and Chair of the IAHR Fluvial Hydraulics Committee. She presently is an Associate Editor of the Canadian Journal of Civil Engineering and Editorial Board Member of the Journal of Environmental Fluid Mechanics. She received the IAHR Arthur Thomas Ippen Award in 2005, and the CSCE Camille A. Dagenais Award in 2013. Prof. da Silva has also distinguished herself as an educator, both at graduate and undergraduate levels, and is the recipient of three teaching awards at Queen’s University.

M. Selim Yalin obtained his Civil Engineering Diploma in 1950 and his Ph.D. degree in 1953, both from the Technical University of Istanbul. After completing his military service in Turkey, he moved to Karlsruhe, Germany, where he held the positions of Scientific Collaborator at the Institute of Hydraulic Engineering of the Technical University of Karlsruhe (1955-1956), and Research Officer at the German Federal Waterways Engineering and Research Institute, BAW (1956-1960). In 1960 he moved to England, where he worked at HR Wallingford, first as Senior Scientific Officer and two years later as Principal Scientific Officer. In 1966, Prof. Yalin spent one year at the University of Alberta in Canada as a Visiting Professor. He eventually joined the University of Calgary as an Associate Professor in 1967; and in 1969 moved to Queen’s University in Kingston, where he worked as a Professor until 1990, and then as Emeritus Professor until the end of his life in 2007. Prof. Yalin’s contributions cover the fields of hydraulic physical modelling, sediment transport and river mechanics. He authored and co-authored close to one hundred scientific publications and several books, including “Theory of Hydraulic Models” (Macmillan, 1971), “Mechanics of Sediment Transport” (Pergamon Press, 1972, 1977) and “River Mechanics” (Pergamon Press, 1992). Prof. Yalin received the CSCE Camille A. Dagenais Award in 1997; and the title of Honorary Member of IAHR in 2005 for his outstanding accomplishments in fluvial hydraulics and sediment transport, and his support of IAHR especially through the Fluvial Hydraulics Section, which he chaired from 1986 to 1991.