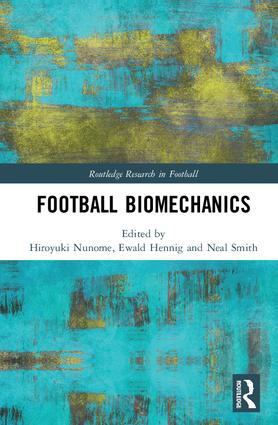 Football Biomechanics explores the latest knowledge of this core discipline in sport science across all codes of the sport. Encompassing a variety of styles, including original scientific studies, syntheses of the latest research, and position statements, the text offers readers the most up-to-date and comprehensive reference of the underlying mechanics of high-level football performance.

The book is divided into five parts, covering fundamental football actions, the biomechanics of direct free kicks, footwear, biomechanical considerations in skill acquisition and training, and artificial turf. It bridges the gap between theory and practice in a variety of key areas such as:

Made up of contributions from leading experts from around the world, Football Biomechanics is a vital resource for researchers and practitioners working in all football codes, and useful applied reading for any sport science student with an interest in football.

2. The support leg motion as a great contributor to football kicking

3. The biomechanics of place kicking in Rugby Union

5. Biomechanical characteristics of the long throw-in

7. Impact phase of the knuckle shot

8. How to kick the knuckle shot: Ball impact characteristics of top professional players and its application for training

9. Kicking accuracy can be influenced by soccer shoe design

10. Biomechanical and motor performance differences between female and male soccer players: Influences on the game and recommendations for gender specific footwear

12. Influence of traction on running performance and lower extremity loading of soccer players: Interplay of shoes, surfaces and training

Hiroyuki Nunome is a Professor of Biomechanics in the Faculty of Sports and Health Science, Fukuoka University, Japan. He is a former President of the Japanese Society of Science and Football and has been a member of the International Steering Group on Science and Football. He is well known for his pioneering works regarding the biomechanics of football actions.

Ewald Hennig is a Professor of Biomechanics at the Institute of Health and Biomedical Innovation, Queensland University of Technology, Australia. He is well known as patent holder for pressure distribution devices of the company NOVEL Inc., Munich, and as a world expert for footwear biomechanics relating to football.

is a Field Leader in Biomechanics and Research Methods at Chichester University, UK. He has recently been featured by Sky Sports in 'Ronaldo: Tested to the Limit' and by Disney XD in 'Goalmouth'.