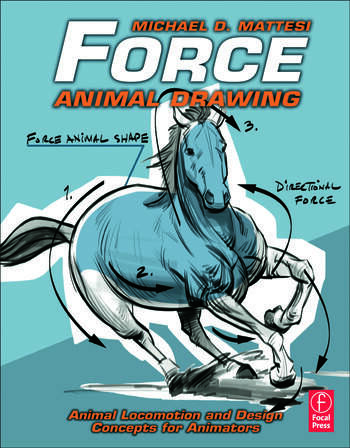 Many artists are unsure how to bridge the gap between the many basic 'how to draw' books and the more advanced ones dealing with the esoteric details of composition, perspective and anatomy. Force: Animal Drawing is the comprehensive guide to developing artistic animals that are creative, dynamic and anatomical, bridging the gap between foundational art and advanced techniques. Artists and animators alike all find animal inspiration when animating characters- be they human or inhuman. For a unique 'larger than life' character, readers will learn to apply the unique facets of animal movement, locomotion, expressions, facial features, physical build and personality to their traditional and digital art. Readers will also adapt key industry tricks and techniques to personify animal animations with key characteristics of a human's face. Explore the practical application of force theories and learn from today's leading character designers with the included artist interviews and an extended video tutorial via www.drawingforce.com.

FORCE: Line is an ideal

the Law of Thirds

Michael Mattesi has authored four FORCE books, published in numerous languages, utilized around the world to inspire and educate artists on the concept of FORCE. He has instructed FORCE Drawing for over twenty years and inspired thousands of artists.

Michael lives in northern California with his wife and two daughters. Visit him at:

or email him directly:

"I have been illustrating professionally for 15 years. I am self taught, meaning I rely upon books and advice from peers. I've always noticed there was some elusive thin that was usually missing from my figure drawings that made them less dynamic. Burne Hogarth's books were very helpful but they didn't teach me how to get into the Flow. How to them them Go Pow! This book gives you the direction to feel out these forces and shapes. I used to think that these things couldn't be taught. When Mr. Mattesi's lessons click in your brain, you are truly feeling this power. For me, as an animator, it makes all the difference in the world."--Brian Leblanc